For travellers hustling through Terminal 1 at Pearson International Airport on November 22, it must have been a curious sight – 200 adults and children wearing construction boots and bright yellow and black Lafarge backpacks with hard hats strapped to the outside. 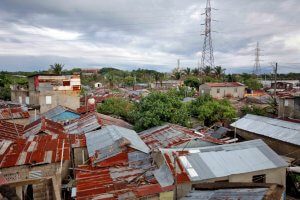 This was the scene at the Sunwing check-in counter as the members of the OHBA’s Humanitarian Build in Puerto Plata, Dominican Republic, prepared to fill the Boeing 737. Wearing the boots meant not adding the extra weight to the luggage. The mood was jubilant and filled with an air of excitement and anticipation. We were going down as part of a build mission organized by Live Different Hero Holiday. And while noone really considered ourselves to be heroes, the expectation was that we would be welcomed and appreciated for the six homes we would be building. 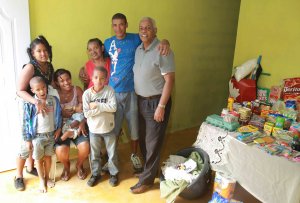 During the ride into the poor neighbourhood of Aguas Negras in northwest Puerto Plata on that first day, the mood was upbeat and filled with a positive expectation that we were about to change the lives of six families.

We anticipated poverty, but what we actually witnessed was not something we were prepared for. The jovial mood was quickly replaced by disbelief. The conditions are difficult to articulate, and yet they are a way of life for these people. The streets are dirt and rocks with pools of grey and black water – open sewage as a result of a lack of proper systems. The homes, many of which are ramshackle and pieced together with bits of wood and tin, may have flushing toilets, but the drain ends in the backyards where black ooze filters through the sand and enters the streets when it rains.

“At home I work with the underprivileged; volunteering in a soup kitchen and with young mothers. I see some heartbreaking situations, but no one is prepared for this,” comments Joyce Brouwer, wife of Dick Brouwer, OHBA past president. It’s a common sentiment that is echoed for most of the week. 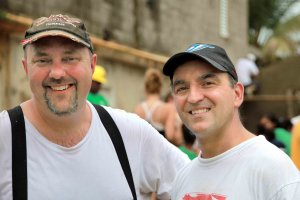 “A really overwhelming feeling was seeing and then really understanding the poverty in this neighbourhood,” says OHBA president Doug Tarry. “Simply raising the floor of their home could be the difference between improved family health and a long slow death.”

Above it all, however, the people themselves were happy. Who knows how many generations have lived in this neighbourhood with these conditions; whether they know any other kind of life, whether their happiness, is through ignorance of what they don`t have or simply through a learned disposition that helps them survive this life of theirs.

But their humour and good nature were uplifting. Children picked up shovels and pitched in on the six projects; they laughed and squealed with delight when an OHBA member gave them a wheelbarrow ride.

At the end of four days, six families had a solid home with a roof and the home was raised two feet to remain dry in the rainy season. On the fifth day, the street was packed with volunteers and the community as the families officially received the keys to their new homes during a joyful and emotional ceremony in the heart of the neighbourhood.

Then there were hugs and tears of joy as each family welcomed volunteers and neighbours into their new homes. The emotions were powerful; so much so that back home days later, members were still choking up over the memories.

As OHBA members talked, they used words such as humbling, appreciate, grateful, life-changing. It was an experience everyone said they wanted to repeat.

“I think one of the hardest things to do as president was not to promise anything in the moment that we would not be able to deliver later,” Tarry said later. “Many people asked about when we are coming back, what we would be doing next. The only answer is, we need to come back absorb what we’ve seen.”