In June’s provincial election, Ontarians returned Doug Ford’s Progressive Conservative Party with a landslide victory. The PCs took a majority of the seats in the Ontario legislature, through pickups in North and Southwest Ontario, as well as the GTA. The New Democratic Party retained official opposition status and the Liberals returned as a second opposition party. The Greens captured one seat in Guelph alongside an Independent in Haldimand-Norfolk.

Looking back at the election, millennials were a large block in this election and represent a group heavily impacted by the housing affordability crisis. Families, working adults and retirees are also feeling the challenges posed by a lack of supply and choice of homes. Without the right variety and volume of housing options, Ontario risks economic repercussions as investment and people leave the province in search of more attainable housing options.

What this all meant was that housing was a key ballot box issue for voters. In fact, polling data consistently placed housing affordability as a top issue.

Voters had a variety of choices from the four major parties. While each party offered unique solutions, what was common among all four was a fundamental commitment to the 1.5 million home target, as outlined in the Housing Affordability Task Force report, as well as recognizing the role of supply-side solutions needed to reach that number over the next decade.

With supply identified as a common goal, the significant work now begins to ensure that the right policy, regulatory and approval processes are in place so that home builders across Ontario can do what they do best—build more homes.

Everyday Ontarians are counting on increased supply and choice to improve housing attainability. Our association is prepared to work collaboratively with government to meet the challenges that new-home buyers are facing, with bold and innovative solutions so that more people can reach the dream of homeownership in a community where they can live, work and play.

What This Means for New-Home Buyers

A re-elected Doug Ford Progressive Conservative government is a positive result for new-home buyers and renters in Ontario. The PCs have committed to enabling the construction of 1.5 million homes over the next decade and critical infrastructure projects throughout Ontario.

There are also a number of pro-housing MPPs and Ministers returning to Queen’s Park, including Premier Doug Ford and Ministers Steve Clark and Monte McNaughton. This result will provide the re-elected government with a strong foundation to help facilitate policies that will get more homes built, faster than before, in communities big and small across Ontario.

This election result has also provided our industry with the opportunity to build upon the successes of the past four years and to bring forward new ideas to facilitate home building in Ontario.

Since 2018, our industry has worked collaboratively with government to achieve numerous successes for Ontarians looking for a new home.

* A Housing Affordability Task Force Report with prescriptive measures that would streamline the home construction process and bring more supply and choice to the market.

* A new Growth Plan to better align housing needs with Ontario’s population growth, ensuring we build enough homes for all those who will call Ontario home in coming years.

* Addressing the case backlog at the Ontario Land Tribunal by increasing resourcing and staff so that projects move ahead with fewer delays.

* Establishing Skilled Trades Ontario, which will bring more workers into the residential construction industry so that homes can be built faster.

Our industry has fought hard for homebuyers and these wins are a direct result of the collaborative relationship our industry has with government over the past four years. This strong relationship solidified housing supply as the core solution to improving housing attainability in this latest election.

Moving forward, the re-elected government has an ambitious set of housing priorities ahead of it. As part of the PCs re-election pitch to voters, the latest provincial budget presented their vision for increasing housing supply and choice in Ontario.

* Introducing annual Housing Supply Action Plans for the next four years using the Housing Affordability Task Force as a roadmap to facilitate the building of 1.5 million homes over the next decade.

Our industry is ready to work with the provincial government and share our industry expertise in building the housing supply Ontarians are counting on. Together, we can advance unique and bold solutions to put the dream of homeownership back within reach of more Ontarians. The opportunity for government to deliver on the people’s housing priorities is critical and OHBA members are prepared to help get the job done. 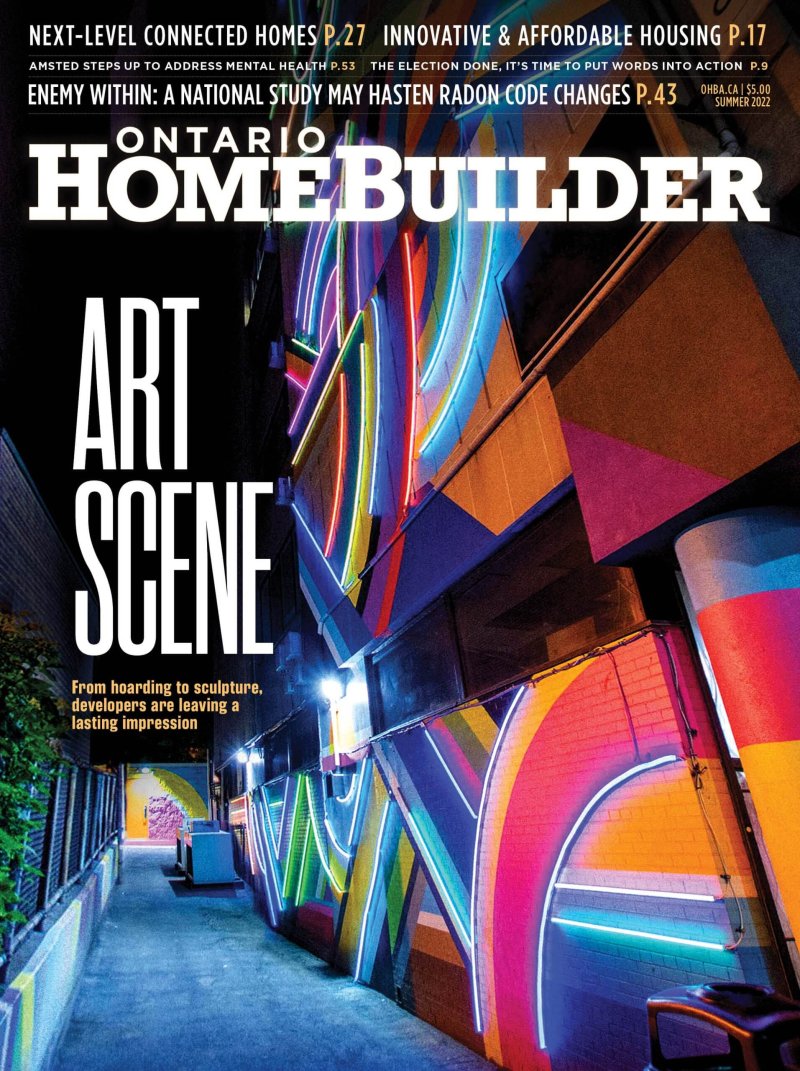 Clearing up the complicated world of home integration technology The conversation goes like this: “Siri, can you call Alexa?” “Sorry, I don’t communicate with Alexa. And Alexa doesn’t talk to me.” We get that a lot these days. As new smart-home products flood into the market in biblical proportions, getting Apple, Google and the rest of […] ... Read more

State of the Art

From striking temporary creations to inspired permanent displays, Ontario builders know how to make a public scene  18 Yonge Street in downtown Toronto, a whimsical bronze sculpture often causes passers-by to pause and reflect on the story it tells about new immigrants to Canada. Colourful alien-like creatures have been the subjects of numerous social media […] ... Read more

Canada’s radon threat is getting worse, and code adjustments are likely to follow “In 2012, my wife Janet was diagnosed with lung cancer and given four months to live unless she underwent immediate surgery to remove the tumors in both of her lungs,” Alan Whitehead relates. Two years of surgeries ensued.  “Touch wood, Janet is […] ... Read more
Recent Magazine Articles
Archive Categories