The pandemic has homebuyers thinking differently

“We came over from England two years ago and were renting in Yorkville. But with Covid, our jobs went, and rents were crazy,” says Mackinnon. “The reason we moved downtown was that there was so much going on and we could walk to anything. But when the lockdown came, it felt like sitting in a little prison of glass, and we didn’t know how long it would last. At the end of April we started looking and found a place in St. Catharines. It’s so much cheaper here—we’d only get a shoebox in Toronto for what we paid here.

“I thought I would miss Toronto, but I don’t. It’s so beautiful here,” she says. “And if there ever is another lockdown, at least we now have our own home and backyard to walk around in without having to worry about wearing masks or catching covid from another tenant.”

Similar activity is taking place in cottage country, where baby boomers might be pulling the trigger a few years early on retirement, muses Chris Crozier, founder and CEO of Crozier Consulting Engineers. “In the Collingwood and south Georgian Bay Area, we’re seeing a big post-COVID-19 uptick in the market,” Crozier says. “We have builders and developers coming to us—some with projects that were dormant for years, asking how quickly we can get building permits. And we’ve already had a strong run for five to seven years up here. I don’t think we’ve ever been busier, and the forecast is very strong.”

The decision to leave the city, and the GTA in general, is being made easier by the mostly seamless nature of the pandemic-induced transition of working remotely.

“One of biggest problems used to be what we called the ‘Trailing Spouse Syndrome,’” Crozier says. “Someone might want to live in the Collingwood area, but their spouse was, say, a lawyer in Toronto. But now we’re hearing of those same lawyers saying they might work from home indefinitely. So people will move outside the core since they don’t need to worry about that onerous commute. I think this could change the entire landscape.”

“This has also shown businesses that they can save money on rental spaces and travel, that you can bring people together through technology,” adds Avi Friedman, an author, social observer and professor of architecture at McGill University.

That’s good news when it comes to employee retention and recruitment. “The net we use to attract employees to our company is much broader now than it was pre-Covid,” Crozier explains. “Our rule of thumb was that you had to live within 45 minutes of one of our offices. But now it’s conceivable to attract people in Ottawa or Regina, for instance. Great ideas occur spontaneously around the water cooler, and we will continue to provide office space to our employees, because there’s a great value in being together. But I do see a hybrid moving forward.”

Those fearing an all-out exodus from the city core, however, need not fear. “David Amborski, a professor at Ryerson University’s School of Urban and Regional Planning, and a professional urban planner, suggests the effect of COVID-19 on high-density living is yet to be determined,” writes Tracy Hanes in the Toronto Star. “But, he notes, recent polls have indicated just 3-5% of high-rise dwellers will consider relocating.”

And as counterintuitive as it sounds, while the OREA poll highlighted that 60% found the concept of living in suburbia or rural areas more appealing today, 31% of respondents said they actually find living in the city more attractive since the pandemic began.

“It’s likely that people who like downtown living, like it a lot,” OREA President Sean Morrison surmises. “The appeal could also be from an amenities perspective. Large urban downtown areas are more walkable, and tend to have more services such as better internet, more grocery delivery options and more access to healthcare.”

If nothing else, however, the pandemic has served as a reminder of the need for flexible—and more efficient—living space within the home, be it a home office or the movement to age in place.

“This has shone a light on how the elderly are treated and how they are more prone to getting infected,” says Friedman. “I believe many who previously placed their parents in old-age homes now feel guilty about it, wondering if they should have dedicated more space within the home for them. How we design for aging is going to change. We’ll see more multi-generation arrangements—not just among cultures that are already accustomed to it.”

Another sure thing is need for home offices to be routinely incorporated into the schematics. According to an Angus Reid poll released in June, only one-third of Canadians working remotely expect to resume working from the office as consistently as they did pre-pandemic. “Most anticipate splitting time between their workplace and home, while one-in-five say they will remain primarily at home,” the poll noted.

Some architects have already adjusted for the changing times. “We have modified all of our design work in the early design phases over the past few months, adjusting their program to accommodate things like greater emphasis on home offices or spaces to work, including soundproofing or other ways for people to separate themselves from the family,” says Jay Lim, founder and lead designer at Ottawa’s 25:8 Architecture + Urban Design Ltd.

“Acoustic isolation has become a real issue—I’ve found myself wanting to mute the humans in my space rather than on my screen,” says Natasha Sandmeier, an adjunct assistant professor of architecture and urban design at the UCLA School of the Arts and Architecture. “But the thought of maintaining privacy and acoustic isolation in a two-bed apartment occupied by more than four people is a very real situation shared by many today, and one that will require innovative responses by both architects and furniture designers.”

Ensuring that the home office “feels like a workspace,” is key, explains Lim. “We try to engage the client to help their space be more productive. And where you can’t dedicate an entire room to it, we’re good at being creative. A Zoom-call room could be a reformatted closet or a hidden room that’s sound-isolated with a professional backdrop. We have one in a New York City condo that’s maybe three feet wide by five feet deep. We’re also actively thinking about the way the room is lit so that you have light on your face and the background. I think you’ll see a lot of our work coming into the market with these unique spaces.”

There might also be consideration for home schooling and activity areas for youngsters, notes Friedman. But don’t expect homebuyers to turn away from open-concept designs.

“I don’t think we’re going to see more cellular spaces, but I do see modifications to our lifestyle,” Lim says. “We do something called kinetic architecture, where spaces or furniture transform, where you’d never realize they were the same space. A lot of our clients live in great neighbourhoods and they don’t want to leave; they just need more creative use of their existing space.”

The pandemic has also instilled an increasing need for accessibility to the outdoor environment in condo design, Lim notes. “The ability to go outside and interact with nature, whether it’s a more substantial balcony or larger windows that can be opened—I think they’ll be larger trends. You don’t want to be stuck inside anymore.”

“People are paying so much attention to gardens now,” Friedman adds. “I think landscaping becomes more important, including home and condo gardens and solariums, which have already been trending.”

In the immediate future, there should be government assistance for builders and renovators, Friedman predicts. “I also see a huge package of incentives coming from the government in four months or so, renovation being one of them.”

The market is also ripe for a ‘healthy home’ builder upgrade package, Friedman predicts. “Say it’s $15,000. That’s nothing for some extra air filtering, easily-cleaned surfaces, soundproofing and ultraviolet lighting that kills germs. Elevators, for example, can be made safer, with air filters and buttons with ‘eyes,’ where you just put your finger in front of a button to activate it.

“People are scared, and will remain a degree scared for years,” Friedman says. “We will remember this crisis.”

One way or the other, expect there to be changes in residential construction design, multiple experts predict. “Disease has often driven change in architecture and design,” writes Avishay Artsy, University of California, Los Angeles, on website Science X. “Cities cleared slums and opened up public spaces in response to the bubonic plague, and widened boulevards and added indoor plumbing due to yellow fever and cholera. The open-air sanitariums designed to treat tuberculosis and other pandemics inspired the streamlined look of modernist buildings and minimalist furniture, which leaves few places for dirt and germs to hide.”

“If things don’t change now, this will at least mark the beginning of thinking about change,” says Friedman. “It will provide planners, architects and builders with new ideas. We are not seeing a single phenomenon. There was the SARS pandemic, Ebola, H1N1. People think this will be a recurring event as we continue to encroach upon nature.”

Friedman sees it as an opportunity for builders, architects and manufacturers. “Things happen when people are pressed to the wall, and this is one of those occasions,” he says. “There is a wide open canvas for innovation here. There should be a competition for innovative thinking.”

While some are leaders, most are slower to adapt and adopt, Friedman observes. “The National Association of Home Builders in the U.S. did a study and found that only a tiny percentage of builders, maybe 5%, were true innovators and will wake up tomorrow and do something different. But where there is money to be made, change will happen.” 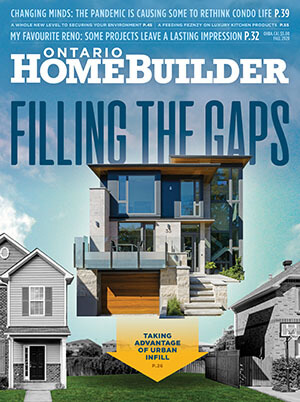 Four Renovators Deconstruct Their Most Memorable Projects A dream. That’s where a renovation journey often begins. The conversation over warm lighting in comfortable surroundings might have started with pages torn from a design magazine, or a TV episode that transfixed a client with an idea for a kitchen well overdue for an updo.  In almost […] ... Read more
Recent Magazine Articles
Archive Categories