Despite recurring predictions of collapse, the housing market has marched onward

For two decades, both media and economic pundits have predicted the imminent collapse of the Canadian and Ontario housing markets. In many respects, who could blame them? The numbers have appeared unsustainable for years now, with housing prices dramatically outpacing household income over the same period. In 2000, the average pre-tax household income in Ontario was $55,700. In 2018 it was $89,270. That’s a 60.27% increase. Very impressive! Except that during the same period, the average cost of a new home went from $184,003 to $571,973. That’s a 211% leap. That means housing prices rose more than three times faster than salaries over the same period. And note that this was before the pandemic! Home prices have, of course, soared exorbitantly since then. In June, the Canadian Real Estate Association reported the average sale price of an Ontario home was $857,754—26% higher than the previous year.

Yes, it was more expensive to borrow money a generation ago. The average five-year lending rate in 2000 was 8.34%, compared with 4.32% in 2018 and just 3.26% today. But coming up with the hefty down payment and passing the required stress test is removing potential homebuyers from the market.

“I encounter #homebelievers every day who, like their parents and grandparents before them, want to own their own home—someplace that is theirs alone; somewhere they can raise a family and build a future,” relates Ontario Home Builders’ Association Chief Executive Officer Joe Vaccaro. “But when the average cost of a home in this province has jumped roughly 350% since the year 2000, the dream of homeownership is dying for many. At the very least, it’s  pricing people out of the homes that they want, our of the towns and cities they want to live. This is why housing will be an upcoming election issue.

“In some respects, the  affordability issue is simply a matter of supply and demand,” Vaccaro notes. “If supply grows, prices will subside. But we need government initiatives to encourage and support that change, and to implement policies that can make new homes more affordable. If government is serious about building communities, they need to focus on increasing supply so that more Ontarians find more homes they can afford, and in communities where they can live, work and play.”

Such an approach is all the more important given the expected numbers in the decades to come. According to the provincial government, “Ontario’s population is projected to increase by 35.8%, or almost 5.3 million, over the next 25 years, from an estimated 14.7 million on July 1, 2020 to over 20 million by July 1, 2046.”

The continuing population rise has been coupled with an enduring demographic shift from large households toward smaller households throughout Canada. As StatCan noted, “the 1981 Census marked the first time that one-person households (20.3% of all households) surpassed households of five or more people (14.6%). Since then, the gap has continued to widen.”

If federal, provincial and municipal government policies are not enacted, prices will only rise further. But can the trend continue without implosion?

As the following pages reflect, predictions are sure to follow.

To view the charts and graphs in this article spanning  housing, immigration, population, income and interest rate data from 2005-2021 click here. 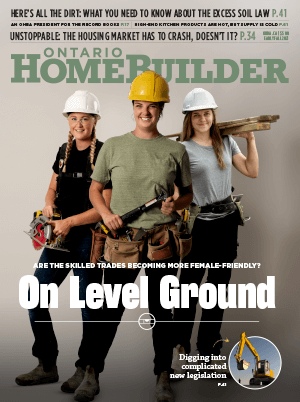 Can You Dig It?

New regulations are breaking ground on excess soil management It’s rather difficult to build a home or condo without having a little dirt left over. OK, a lot of dirt. In fact, an estimated 25 million cubic metres of excess soil is generated in Ontario every year, according to the Province, and must be moved […] ... Read more

By Ted McIntyre with Bob Schickedanz

It’s been a unique term for OHBA’s current leader The term “unprecedented times” seems on the tips of everyone’s tongue these days, and so it is for the Ontario Home Builders’ Association and its enduring president, Bob Schickedanz.  Next month at the annual Meeting of Members, OHBA representatives will weigh the merits of extending the […] ... Read more

The Industry Does Not Have To Look To Far To Solve The Trades Shortage While Jane Almey knew there would be many occupational paths for her as a civil engineering graduate, never in her wildest dreams did she imagine a career as a construction manager on high-rise building sites. “Sitting in the office all day, […] ... Read more
Recent Magazine Articles
Archive Categories