As  the history of construction goes, the onset of condominiums seems comparatively recent. Yet the concept actually dates back to Babylon, where a 4,000-year-old document cites the sale of a first-floor dwelling, with the property owner retaining title to the second floor.

“On display at the Brooklyn Museum in New York City is a papyrus condominium deed written in 434 B.C., describing an apartment and its boundaries, and giving specific instructions on the conditions of the sale,” the Chicago Tribune noted in a 1986 article entitled ‘The First Case of Condo Fever.’ “Faced with a shortage of land, Roman leaders solved their housing dilemma by passing a law permitting citizens to own individual units in multifamily structures, thus encouraging their construction. Subsequent legislation offered rules for tenant conduct and even established the annual sum each owner needed to contribute to maintain common areas.”

Roughly 2,400 years later, the Province of Ontario followed suit, legalizing the concept in 1967 with the passing of the Condominium Act in hopes of providing affordable housing amid rising single-home prices. Ontario’s first condo project, Peel Condominium I, followed in short order. Comprising 37 two-storey townhouses and built by Bramalea Consolidated Developments, it welcomed its first residents in January 1968.

“The Condominium Act allowed that form of housing to exist legally and meant you had all the rights and privileges that you do with other forms of real estate,” explains Jim Ritchie, Chief Operating Officer of the Tridel Group of Companies, which manages 72,000 condo suites. “You could pledge mortgages against it, take title to it, etc. It was like an apartment building, except that you owned the apartment and you shared in the operation of the building, both in terms of usage and cost.”

The opportunity for the private ownership of roads meant that builders could reduce road setbacks, thereby allowing for more units to be built on a site. It also meant that instead of having to find a buyer for the project or renting units themselves, builders could quickly recoup their investment—and  more—by selling the individual units.

In “Real Condo Life: What it Really Means to be First,” Andrea DelZotto, now a Tridel board member, observes, “The condo concept had great appeal for developers, who could now add density to land. But perhaps what was most appealing to all was the fact that condominiums enabled a huge shift toward affordability.”

Toronto’s launch into the world of condos began on the low-rise side, when Burton Winberg, whose company later became Rockport Group, developed York Condominium 1 in 1968.

“My dad was building multiple-family units in the form of what they used to call maisonettes,” relates Bert’s son, Jack, now the CEO of Rockport Group. “About that same time, he had travelled to California, where they had just brought in a strata (condo) plan of title and ownership.”

Bert returned to Toronto with that concept still fresh in his mind. As soon as Ontario’s Condo Act became law, he decided to convert one of the five projects he had on the go—on Albion Road in Rexdale—into condominiums. It still exists today.

“My father was one of the first  truly ‘affordable housing’ guys and decided that this was a way to increase density of development and to bring the cost of housing down,” says Jack. “The first one worked so well that he did it again…and again…and ended up building thousands of condo units.

“He was absolutely a visionary,” Winberg says. “He was very much ahead of his time.”

Bert Winberg, who was inducted into the Building Industry and Land Development Association (BILD) Hall of Fame in 2003, passed away in 2018.

Ironically, while they would come to define Toronto’s skyline, the home of the first high-rise condominium in Ontario’s was actually Ottawa, with Minto Group’s 11-storey Horizon House in its Parkwood Hills development opening in Nepean in 1969.

The demographic of condo owners has shifted somewhat through the years, notes Ritchie. “Initially, condo homes were sold to empty-nesters or were just an affordable alternative in terms of ownership,” he says. “It was very new and it didn’t go crazy right out of the gate. People didn’t understand it.”

Everything changed in 1975, however, when the provincial government brought in rent controls. That pretty much brought apartment construction to a screeching halt. Builders and developers who couldn’t see future profits in apartments simply retooled and started building high-rise condominiums.

That changed again in 1997, when the provincial government removed rent controls from anything that was new as of 1991.

“That also made it more interesting from an investor’s perspective, because they didn’t have rent control if they chose to buy a suite as an investment,” Ritchie points out.

It was one of several pieces of provincial legislation and court rulings in Ontario that fueled the growth and direction of condos. A court ruling in 1991 citing “adult-only” buildings as basically unconstitutional under the Ontario Human Rights Code opened the floodgates for families with young children who couldn’t afford single-family dwellings.

But the single most significant decision affecting the GTA condo market since the Condominium Act itself may have been the 2005 passing of the Greenbelt Act, which protects millions of acres from urban sprawl. That meant that cities and towns, especially those in the GTA, were forced to grow up instead of out, since, for the most part, they were squeezed by Lake Ontario on one side and the Green Belt on the other.

Today there are an estimated 900,000 condo units and 11,000 condo corporations spread across the province. According to Canada Mortgage and Housing Corporation, roughly 55% of homes under construction in Ontario are condominiums.

The condo concept has evolved over the years to fit the various markets and lifestyles, with amenities venturing far beyond gyms and swimming pools. The Minto Group even has a salt rock wall meditation room in a project they’re constructing in Toronto.

“I think the biggest change we’re seeing is the mixed-use nature of condo development,” says Ritchie. “Today there may be a retail component and an office component, with daycare, and with residential on top. There are all sorts of possibilities. 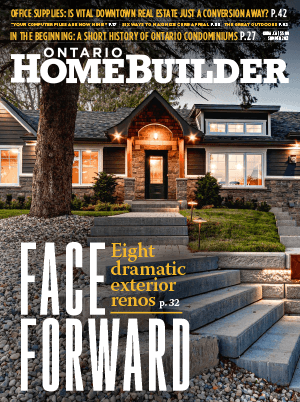 Flexibility, pre-planning and early collaboration keys to office-to-residential conversions Among the many things that the COVID pandemic has changed forever is the way we work. Employees in many industries have returned to the workplace, but even as the pandemic protocols relax, some office employees are still operating from home for at least part of the […] ... Read more

The Drama of Exterior Renovations They say you can’t judge a book by its cover. But you can certainly catch the eye of passersby before they notice any other book on the shelf.  Or, in this case, any other home on the street.  Whether it’s about curb appeal and the resulting bump in property value, […] ... Read more