About three seconds before Vince Molinaro steps through the door, his charisma has already arrived. But far from a bombastic personality, his presence is part childlike enthusiasm and mature self-confidence—the latter built brick by brick with one personal and professional success story after another. 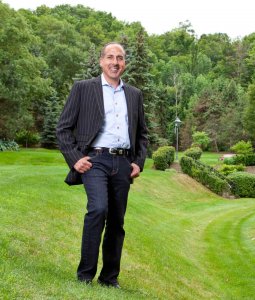 It’s an impressive portfolio, to be sure. Fifty-one years after the family patriarch Domenic arrived from Italy, the Molinaro Group—now headed by partners Vince (president), his brother Robert (executive VP) and brother-in-law Sam DiSanto (managing director)—has developed over one million square feet of commercial real estate and 10,000 residential units. It has also transformed the community it calls home.

“Fifteen years ago, Burlington was pretty much a commuter town,” says Vince, whose six projects in the community include Strata Condominiums, with its groundbreaking geothermal heating/cooling system. “Our Spencer’s Landing was probably the first condo in downtown Burlington in 20 years. It attracted more people, which is important, but we also had a commercial element with our other projects. We helped transform the waterfront, and now we’re changing the look of midtown Burlington with our new five-building project by the GO Station—Paradigm.”

“They basically changed the face of downtown Burlington forever, both aesthetically and financially,” echoes New Horizon Homes president Jeff Paikin. “They’re happy to take the lead in Burlington. But they do so because it is appropriate; not because it is assumed, which speaks to the great sense of how Vince treats everyone.

“But let’s give credit where credit is due,” Paikin adds. “His parents did a great job. They raised him in a successful home with great business acumen. Vince and he was a worker-bee board member. But he has a sense of levity about him that makes everyone around him feel empowered and happy about what we are doing sitting around together as volunteers and contributing. People followed his lead because instead of telling them what to do, he showed them what he was doing.”

Molinaro is nursing a pint from an Ontario microbrewery at Earls Kitchen & Bar at Burlington’s Mapleview Mall, and the conversation is becoming more interesting by the minute. Spend 30 minutes with the 43-year-old Hamilton native and you’ll leave feeling you’re drawing from the well of life with a thimble while he’s got a bucket. Consider that this is a man who helped finance a recent docu-drama based on the life of Johnny Cash’s Canadian manager Saul Holiff.

There’s also a newfound passion for muscle cars. “My buddies are heavy into this lifestyle—collecting and restoring old cars,” Vince explains. “This past weekend we left at 2:30 a.m. on Sunday to drive to North Bay to buy a 1969 Chevelle, the same model they used in the movie Talladega Nights.” Showing off his whimsical side, he is painting the car in the same black-and-gold colour scheme, replete with the No. 13 on the sides, as character Ricky Bobby’s (Will Ferrell’s) father’s car from the movie. 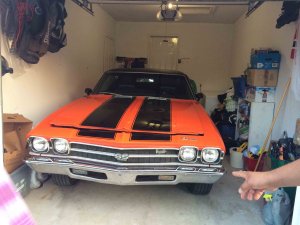 Vince’s taste for life can also be taken literally. “My wife Tina and I had a pizza oven at our old condo and always liked to entertain around pizza-themed events. I’m building a pool cabana in my backyard and am installing a wood-burning oven there. We love to cook and make homemade pesto and preserves. I also make soppressata, an Italian dry salami. I do it with a dozen other guys. We grind the meat, mix in the spices. The curing process takes several months. I tend to hoard it, because once people try it, they all want it.”

And what of his twin brother Robert? “People get us confused easily, which makes for a lot of fun. But then I grew the goatee and he wears glasses. We switched classes a few times in school. He didn’t tell me there was a test that one day.”

And the unlikely connection of his parents, Domenic and Lina? “They both lived in Calabria, Italy—one town apart from each other—but ironically never met each other until they moved to Toronto!”

While his parents moved west to start a new life, Vince has travelled in all directions in expanding his horizons. “As a family—dad, mom, brothers, sisters—we bought a ski chalet in Ellicottville in Western New York. I put my three-year-old (Isabella) on skis last winter. We go virtually every weekend in the winter.”

He also partakes in an annual ‘boys’ trip to Florida, with the focus ranging from the Daytona 500 to the Barrett Jackson auto auction. Next spring he will be taking his fourth trip with a dozen friends, many of whom are also involved in the residential construction industry. The first of the biennial excursions began seven years ago when the group travelled to the Basilicata region of  southern Italy, near the arch of the Italian boot. The last two involved the chartering of a 150-foot, fully staffed boat to tour Croatia, as well as Istanbul and the Greek islands.

But home is where the heart is and, in Molinaro’s case, a little history too. “Last year, we bought a 70-year-old house on an 11-acre property in the middle of the Hamilton Escarpment in Winona. It’s one of three homes built by one of the great Hamilton-region business icons, E.D. Smith (of jam fame). It has a lot of character. There was an old safe in the basement that we’ve kind of converted over to a wine room. We pretty much live on the edge of wine country.”

While the celebrated condo builder has lived in four such towers in his past, life has altered his priorities. “It’s a great form of home ownership and a great lifestyle, but I have two young kids (Isabella and Giuliana, 2). I wanted the backyard and pool. Our thing is to go swimming with the kids when I get home every night.”

Mentoring for the future

Still, it’s hard not to mix a little business with pleasure when you’re married to another OHBA member. Molinaro and his wife will be celebrating their first anniversary at the OHBA Conference in September. They met at a national conference in Whistler in 2008—Tina with TD Bank at the time, and now a principal with Inspired Mortgage Management Solutions (IMMS) in Burlington. Little wonder that Molinaro’s presidential mandate involves celebrating the merits of volunteer work within the provincial association.

“We should always be looking for a way to include the locals and take advantage of the strengths of the membership,” he says. “In my formative years, I wasn’t really aware what an HBA was or what it did. But there were a few people who thought I had some merit and might be good to include in the local Hamilton HBA. I started there with social committees, then the board of directors, eventually the executive and then president. But without someone driving me in that direction, I probably would not have ended up where I am now.

“And it’s not just a case of helping out the organization; it’s personal growth,” says Molinaro. “It makes you a better businessman; knowing the builders and subtrades, but also getting to know presidents of big companies, politicians at all three levels of government and learning the issues firsthand. It’s makes you a better advocate for your company. You can send people to school and one-off courses, but the OHBA is a perfect grassroots way to grow up and mature as a businessperson.

“This means grabbing someone we think is a good person and a good fit and getting them involved somehow. Talking to them; building up their confidence; getting them exposure.”

As with any good home builder, Molinaro understands that great structures begin with solid foundations. “We have super people at the OHBA and the locals, but volunteers are paramount to the success of the Association. Legislation in the GTA translates differently in North Bay or Sudbury or Windsor. We have to bring it home to the locals to get their input, and the more good people involved at those levels, the greater the understanding of the issues.”

There is a most appealing transparency to Vince Molinaro, and every now and then you see that wide-eyed 10-year-old emerge. Reflecting on the celebrated launch of his company’s new Paradigm project, Vince beams: “We thought we had it, but when we got the sales to back it up, that’s when we knew we’d hit this one out of the park. That was a great feeling.”

The location of the proposed 930-unit development is an astute response to the region’s transportation infrastructure challenges, something with which Molinaro is intimately familiar. “The Gardiner is going to be under constant repair the next few years. The 401 is a disaster. The 407 is a viable option, but the GO Train can be in downtown Toronto from here in less than an hour,” he notes. “My dad used to commute two or three times a day to Toronto—even Sundays. He didn’t want that for us. He told us, ‘You have a family. Whatever you have to do, build up a name for yourselves locally and stay local.’ And that’s what we’ve done.”

If the community continues to support the Molinaro Group, it’s certainly been reciprocated. Early last year, the company cut a cheque for
$1 million toward capital improvements at Joseph Brant Hospital—an act that triggered further donations from the private sector.

“We figured there was no Burlington institution that helped so many people,” Vince explains. “Our kids were born there; our elderly are taken care of there. We showed the community that we not only have a successful business here, but also want to able to give back to the community and help out any way we can.”

That kind of commitment is in the DNA of the Molinaro Group. “We adopted a lot of the practices and people my father has used for decades,” says Vince. “My dad’s very loyal. It’s almost like a partnership. You’re relying on each other for their business. Maybe we’re paying a little more here or there, but at the end of the day it’s quality work. And we’ve kind of grown up together doing the same things our dads did, building on those same relationships, some of which go back more than 30 years.

“Projects are becoming complex and technology is changing, so you have to be innovative as well, so we have brought in new consultants to keep up with the times,” Molinaro notes. “We adopted LEED as the standard for all of our projects years ago. The amenities in our buildings are leading-edge, from theatre rooms and outside circuit training, to basketball courts, pools and guest suites. It’s important to be loyal, but you also have to be like-minded and aspirational and to move with the times.”

In that respect, OHBA’s next president is ideally suited to negotiate the road ahead. And knowing Molinaro, he’ll do so with a keen eye and a smile on his face. 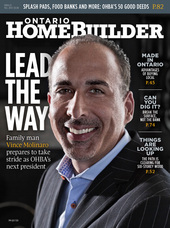