In his opening address during a virtual fireside chat with OHBA members in late November, the Hon. Steve Clark, Minister of Municipal Affairs and Housing since 2018, sounded alarm bells over what a change in government could mean for recent strides made in Ontario housing development.

“It’s very unfortunate that the opposition has raised a housing platform that I think promises in my heart of hearts to reverse the progress,” Minister Clark observed. “I couldn’t believe my eyes when I saw vacancy control added to their platform, meaning that landlords aren’t going to be able to deal with the rents that they charge. I looked at the gains that we’ve made going back to 1992 housing starts, and this will destroy the rental market in Ontario, making investing in, building and maintaining rental housing less attractive. Given the progress we’ve seen, we cannot allow that to happen if we’re going to succeed in building the housing supply Ontario desperately needs.”

Clark knows how to send a message. He first announced his presence on the political stage in 1982 when, at the age of 22 and fresh out of university, he was elected Mayor of the City of Brockville, making him the youngest person in Canada to hold the mayoral post. He was elected MPP for Leeds-Grenville in a March 4, 2010 by-election, crushing his opponent by a 66% margin, and has guided the renamed riding of Leeds-Grenville-Thousand Islands and Rideau Lakes ever since.

OHB: Tell us about your first home purchase.

Minister Clark: “Twenty-one Amy Street in Brockville. A nice little powder blue two-storey with a garage that could barely fit my car. There was a patch of grass that I could cut and a driveway and walkway I could shovel.

“It was a wonderful feeling to be a homeowner, to experience that power and feeling of independence. It was like nothing I’d ever experienced in my life. And that’s the same feeling I bring as Minister. There are so many young couples who don’t feel they will ever realize the dream of homeownership. And whether you’re a single or couple or a senior—whoever you are­—I want to make sure you have that opportunity to realize homeownership just like I was able to. For too many Ontarians, it’s out of reach, and I think the government needs to re-adjust its policies. And that’s what I’ve tried to do from the day I was sworn in as Minister.”

What struck you during early meetings with OHBA?

“There was an appreciation for the size of the organization. They have over 4,000 member companies. Yes, it includes builders and developers, but there are also trade contractors, suppliers—there are so many involved. I think a lot of people don’t realize the depth and breadth of the organization. And the fact that it’s a voluntary group that advocates for the industry. I’ve dealt with Joe (CEO Joe Vaccaro) both as part of the opposition and since in government. And Bob (President Bob Schickedanz) has also been a tremendous advocate for OHBA.

“I want to thank all the members for the #HomeBeliever campaign. I think they’ve made the difference, and in a very non-partisan way. To look at the strides they’ve made with all the parties is really a testament to the work that the members and the association are doing.”

Can you discuss the motivation of the More Homes, More choice act?

“Our Housing Supply Action Plan started with More Homes, More Choice. It was part of a concerted effort from our government to ensure that people had affordable homes in every corner of the province. It was something previous governments neglected for many years. And let’s face it, the status quo wasn’t working, and we had to take definitive action to address the crisis, whether it be the More Homes, More Choice Act, the Community Housing Renewals Strategy, the work that we’ve done with the Provincial Policy Statement (PPS), the Growth Plan for the Greater Golden Horseshoe—we needed to make it easier and more predictable to build new homes. We needed to take action to reduce planning timeframes, to help build the right type of homes in the right places more quickly, and to deal with the affordability issue.

“I’ll give you an example. There weren’t enough purpose-built rentals in Ontario. And looking at the numbers just prior to COVID, we had seen (huge numbers in) new starts, applications, units under construction­—levels we hadn’t seen since 1992. Even with COVID we’re still seeing a tremendous amount of purpose-built rental.”

So what’s the goal a year from now?

“Our government remains committed to addressing the housing crisis in Ontario, to continue to find ways to move our agenda forward in terms of increased affordability and more housing supply.

“And people have told me over and over again they want us to intensify around major transit stations. People want to live near transit. We’re committed to accelerating the construction of complete communities around transit, including affordable housing. And we believe Minister’s Zoning Orders are a tool we have at our disposal to ensure that homes that people need get built as soon as possible. It’s a collaborative tool. We work alongside municipalities. We’ve made a number of those zoning orders to accelerate critical projects. And I’ll tell you, (between January 2019 and November 2020) we’ve accelerated more than 15,900 homes, including 720 affordable and 100 supportive housing units. We’ve created an opportunity to create 3,700 more long-term care beds, over 1,000 homes for seniors and more than 26,000 jobs. And jobs are needed now more than ever as we move to a recovery model because of COVID-19.

“It doesn’t matter whether it’s purpose-built rental, second suites in basements, laneway homes, mid-size rental apartments, family-sized condos—we have to put policies in place to create that ‘missing middle,’ and we’re going to continue to streamline approvals, work with municipalities and work with other ministries to accomplish our goals.”

Which of those tools are you most proud of?

“I think the Housing Supply Action Plan in its complete form. I realized right from the first day I took over that there’s no silver bullet, not any one thing that will lead to success. You have to look at all of the planning processes. And we’ve reviewed the PPS and created changes that took effect in May, and worked toward changes I tabled in the Growth Plan and the new Lands Needs Assessment methodology. There are a whole bunch of things we needed to put in place after years and years of neglect by the previous government. And there’s much more work we need to do.”

What can builders do?

“I think the Housing Supply Action Plan gives builders some innovative approaches to housing and homeownership. There are about 30,000 to 35,000 new homes built each year in Ontario and many have the potential to add additional suites. Many homeowners and builders are looking for creativity, whether it be laneway homes or new existing homes. I think there’s a lot of opportunity to attack the affordability model.

“The other thing builders need is certainty, and the Community Benefits Charges tool that we created enables municipalities to still collect funds for those very important projects. But it also makes it easier for builders to quantify development costs pertaining to infrastructure and benefits right from the start.

“Again, we made these changes because the status quo wasn’t working. We need to have new ideas and new approaches. And we appreciate the collaboration we’ve had with all the stakeholders, including the OHBA.” 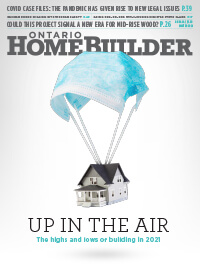 R-Hauz pilot project could signal a new era for mid-rise wood I’m standing in Berlin on a Building Industry and Land Development Association tour in 2013, looking at these brilliant 20 foot-wide, six-storey concrete townhouses,” relates Leith Moore, “and I thought to myself, ‘That’s what we need in Toronto. Except I want to build them out […] ... Read more
Recent Magazine Articles
Archive Categories