The award goes to the company that demonstrates the highest levels of performance, based on stringent judging criteria, in the areas of sales and marketing excellence, unique floor plan design, community service, support of the industry and ability to adapt to changing needs.

“Obviously, the sustainability agenda is very big here and has been for a while,” said Waters. “This award is nice, as we really think not just about sustainability, but design and continually innovating our products and improving customer service.”

(Photo: Minto is a huge supporter of post-secondary education in Ontario as exemplified by their $2.5 million donation to the University of Ottawa Athletics program.)

Since the company’s inception in 1955 as a home construction business owned by brothers Louis, Gilbert, Irving and Lorry Greenberg, Minto has created in excess of 70,000 homes, 17,000 residential apartments and more than two million square feet of office, retail and industrial space in Canada and the U.S. It builds an average of 2,000 homes per year and operates in Toronto, Ottawa and Florida.

From its early beginnings, the company was an industry leader, developing a production-line approach to building to provide a timeline for completion of homes and manufactured its own kitchens, trusses and trim.

In the 1960s, it also began building rental apartment buildings. Minto expanded operations to Florida in the 1970s and made its entry into the Toronto condo market in the 1980s. It continues to be a major presence on the Toronto condo scene, as well as a low-rise builder-developer.

Minto has always been at the forefront of green building. Its sustainability agenda started with its apartment buildings and retrofitting them with new windows, and cooling and heating systems to cut operating costs. The company looked at how those techniques could be brought to its home building side and, since then, a culture of sustainability has permeated the whole company.

Minto has an internationally recognized Green Team, which includes: Green Champions, whose focus is on internal operations such as reducing paper use; the Green Task Force that looks at new innovations and products; and the Sustainability Division, where experts with environmental, engineering and LEED backgrounds develop the sustainability plans for each new development.

In the early 1990s, Minto built a prototype home in Kanata that showcased sustainable technologies. Since then, it has become one of the province’s leading green developers. Minto-inspired innovations include all-off switches, HRV fan coils, rainwater harvesting and multi-chute recycling.

(Photo: An exterior view of Minto’s WaterGarden development, a finalist in the 2012 OHBA Awards of Distinction’s Most Outstanding Mid-Rise Building category.)

Its Minto Midtown in Toronto achieved LEED Gold certification in 2009 and was the largest multi-residential building in the country to earn the designation. In 2011, 100 percent of its new homes in Ontario were either Energy Star or LEED certified.

OHBA judges were also impressed by Minto’s support of post-secondary education in the province. It has donated over $1 million to the University of Waterloo Faculty of Environment and $2.5 million to the University of Ottawa Athletics. The Minto Foundation contributes to over 200 charities annually and the company facilitates employee volunteerism through paid volunteer leaves and matching employee pledges to various causes.

“From the beginning, the company shareholders had a strong commitment to philanthropy and community; the submission we made [to the OHBA] doesn’t do it justice,” says Waters. “We’ve invested in facilities for health and education and those things are really important to our shareholders and employees.”

Minto also has made a big investment in employee engagement, “as we believe highly engaged employees strongly correlate to customer satisfaction,” says Waters. Some of the engagement measures have included surveying staff, providing bonuses, involving them in philanthropy, providing a strong vision and plan for the business, delegating authority “and giving them the tools and trust to make decisions.”

The top builder award was among 34 presented in the OHBA Awards of Distinction program, which honoured innovation and excellence in the areas of design and sales and marketing.

The Minto Group was also recently honoured for its 180 Kent Street office tower in Ottawa, named Canada’s Outstanding Building of the Year (TOBY) by the Building Owners and Management Association of Canada (BOMA), an award that recognizes utmost quality in commercial real estate buildings and rewards excellence in building management. 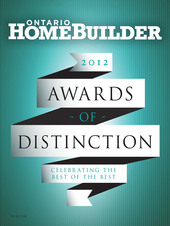