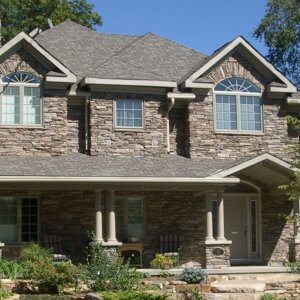 It’s mid-January in the Morewood head sales office of Guildcrest Homes, a factory-built home builder with 25 years’ experience. From newlyweds and a young urban couple with a newborn in their arms to retirees looking to downsize and settle in a lifestyle community, foot traffic on the sales floor is brisk. With rising house prices in major urban centres having made owning a traditional home unaffordable for many, it’s no surprise more homebuyers are considering modular as a viable and affordable option over a site-built home.

The cost advantage does not always translate into actual dollars; rather, the savings occur because modular home builders provide an exact and complete price from the outset of the project the customer can count on.

“Savings are realized in efficiencies in the process—time equals money—such as reduced site inspections,” explains George Tierney, Marketing Manager of Guildcrest Homes, whose company offers everything from single-family and semi-detached to townhouses and multi-unit buildings, and has built more than 5,000 modular homes since forming in 1991. “Our RBC specialist uses $4,000 as that amount saved in financing through reduced number of inspections. Further savings are realized in the energy efficiency of the home and lower operating costs.”

Predictability is another factor for many buyers. At a time when it might be -30C outdoors and traditional sites are shut down, rather than stressing whether their dream dwelling will be ready on time, clients know that a skilled labour crew is busy constructing their home indoors to the designs they signed off on last fall. No weather delays. No fear of the materials being compromised by the elements (think water damage or rotting due to rain exposure). Since the environment is totally controlled, there are no fluctuations with humidity, keeping building materials from warping or developing problems with mould. There are no difficult site locations to deal with. No cost overruns. No labour shortages—an increasing delay for many projects.

Come spring, the finished home, ready for assembly, is delivered to the site, where a foundation has been dug. The home rolls safely down the highway on several oversized trailers. Once the trailers arrive on site, cranes assemble the jigsaw puzzle one modular piece at a time.

While a typical one-storey bungalow consists of two or three modules, larger custom homes might use five or more of varying dimensions. Homes come 85% complete, with utilities such as electrical and hydro all roughed in and finishings such as carpeting, kitchen cabinets and painting already done. A modular home can have any basement a client wants—the same as a site-built home—but it is a site job and not part of the modular portion of the build. Customers can ask the builder to rough in the lower floor and hire a subcontractor later to finish it or use the modular builder’s tradespeople. Even if there are no plans for a basement, modular homes must at least include a crawl space for the home to stitch on to.

“We can deliver better-built homes faster and, at the end of the day, for the same price as a site-built home,” comments Tierney. “The precision of the building is something we take pride in. We use jigsaws and automated framing equipment in our plant, so everything is square, true and precise.”

Modular Homes Are a Growing Trend – Factory-Built Homes Have Advantages

With rapid turnaround times, competitive pricing, precision indoor construction and predicted labour and skilled trade shortages in the construction industry, it’s not a surprise that modular home building is trending higher year over year. According to the latest statistics gathered by the Canadian Home Builders’ Association Modular Construction Council, the value of factory-built building production in Canada was slightly over $1.6 billion in 2016, up about 3.5% from 2015 and above the five-year average. Recognizing this trend, the CHBA established a modular council in early 2017.

Modular or prefabricated homes don’t refer to the style of the home, but rather the manufacturing process. A prefabricated home is a structure built in modules in a controlled environment, like a production facility. The modules are then transported to the home’s final location and fully assembled on a permanent foundation.

Factory-site builds are on the upswing Ontario-wide. From The Beaches in Toronto’s east end to Tobermory on the northern tip of the Bruce Peninsula to Windsor in the west, the sector is represented in all pockets of the province, and has accounted for approximately 15% of single-family housing starts in Canada in recent years. Multi-family dwelling homes built off-site are also on the rise.

The industry has come a long way in the past 30 years, and is a far cry from the typical two-piece homes witnessed in the mid-’80s. The biggest evolution is in the perception of what modular means, both from customers and the broader construction industry. Any stigmas and stereotypes of what modular means have dissipated. “It’s not a mobile home or a trailer,” notes Howard Sher, Executive Vice-President of Quality Homes.

And while modular used to focus solely on the single-family market, there is now commercial and institutional construction and more stacked townhouses. Builders are also working with bathroom or kitchen modules that can be plugged in to mid-rise or high-rise buildings.

Royal Homes, based in Wingham, is one of the province’s oldest modular builders. They’ve been in business since 1971, when the concept of pre-engineered homes was relatively new in Ontario. Their construction process starts with the floor, followed by the walls and ceilings. The walls are built flat, allowing for perfect symmetry.

Chris Weppler, Sales & Design at Royal Homes, has been selling and helping clients design their perfect modular homes for most of the past four decades. “We offer one-stop shopping,” Weppler explains. “Customers know their pricing up front before they purchase. Unless there is something wrong with your site, which is rare, there are no cost overruns.”

For a summer home or cottage, delivery time, in particular, is critical so that the short season is not lost. In a traditional site build, choosing the wrong contractor can often lead to time and cost overruns for consumers.

Another key advantage for purchasers is that factory-built homes are often sturdier, Weppler says. This includes subfloors and especially floor joists. Since modular homes are transported down the highway, the structures are built more sturdily to withstand the road journey, usually leading to a stronger, more airtight home with less preventive maintenance needed in the future.

“Our homes are built indoors, protected from the elements, in an airtight manner,” Weppler adds. “The walls are built on a flat table and we put the studs together with a one-piece vapour barrier, adding the drywall on the flat surface and not hacking into the vapour barrier to create that very important seal.”

Just because they are built in a factory doesn’t mean prefabricated homes are of an assembly line, cookie-cutter nature, notes Sher from Quality Homes. “Manufacturers and builders, designers and architects—everyone has raised their game.”

Most modular builders now have thousands of custom options available, and the sales team and project managers are often amenable to customers bringing their own designs to a project, leading to more satisfied clients.

Barry McPherson is one of those satisfied clients. For years he drove by Royal Homes’ Wingham facility en route to his parents’ cottage on the shores of Lake Huron, near Kincardine. When he decided to replace his family cottage with a modular home, he and his wife worked with Weppler and the design team at Royal Homes to create the dream family cottage for his children and grandkids to hopefully enjoy for generations to come.

McPherson wanted lots of windows to make sure they could soak in Lake Huron’s famed sunsets while enjoying a meal at the dining room table. He wanted an open-concept kitchen and cathedral ceilings. He started with one of Royal’s floorplans as a template and then, working with one of the company’s designers, customized it to meet the expectations he and his wife had for this dream cottage. The end result: a 1,600-square-foot beachfront property and four-season dwelling that surpassed all his expectations. “

I’ve been totally satisfied,” he says. “The quality control is very high and the price was very competitive. From dealing with the sales rep through to getting our design into their system and through to the production process, delivery, installation and finalization on site, the entire process was incredibly efficient and staff at all phases were very service-oriented.

“It’s become the gathering place for our family and where we’ve now shared many special memories.”

Royal Homes has now built three other properties along the same beachfront, with neighbouring homeowners seeing first-hand the magic of a modular-designed home.

When it comes to design, modular is limited somewhat from site builds, such as how wide you can build (it’s not like you can construct a post-and-beam home indoors). But it has evolved considerably in the past 20 years. And while the standard building designs are also limited in the view of some customers when it comes to flooring, cabinetry and windows, most modular home builders like Royal are flexible and will work with clients to meet a client’s design demands and are not averse to subbing out certain features for sourced suppliers from a client.

Who is buying factory-built homes? When it comes to the typical modular customer, there is no set demographic or market segment. First-time homebuyers, newlyweds and/or young millennials looking for an affordable housing option are just as likely to consider buying a factory-built home as retirees looking to downsize or invest in a vacation property. The trend in 2019, at least for Guildcrest, is the demand for a smaller home. “We are talking in the 1,000- to 1,200-square-foot range,” says Tierney. “That’s the current sweet spot for efficiency and capabilities and what our consumer is looking for this year.”

Modular homes are also known as some of the most energy-efficient and green homes on the market; they were first out of the gate with net-zero and lead the market with the use of recycled materials. There are obviously also significantly fewer disturbances to the environment surrounding the construction site. And since factory-built homes are prefabricated in a controlled factory environment, there is negligible wastage of material resources and a highly efficient use of energy. It takes almost 50% less time for the building to be completed, compared to a traditionally constructed building.

Modular buildings are also called “portable buildings” for a reason. They can literally be transported from one place to another without having to go through the process of demolition. The term “modular” comes from the fact that these buildings are built one module (or unit) at a time and are then assembled on site. So it stands to reason that they can also be dismantled. This makes it much easier to take down the building without disturbing the surrounding environment.

At the end of the day, for customers, knowing they will get the keys to their home at the agreed-upon price and without significant delays is reason enough why modular is trending higher and higher. “

On-budget, on-time building is almost extinct,” concludes Sher. “But that is something we guarantee.” 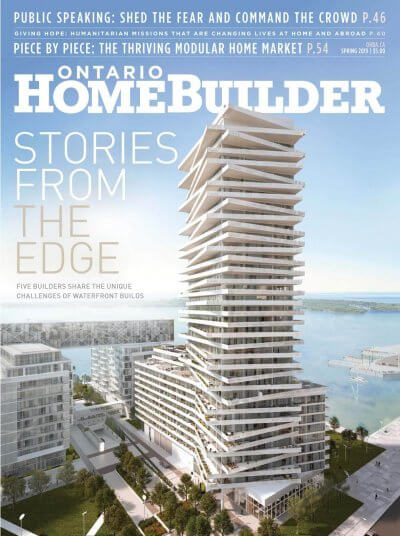 Five builders tell the challenges and rewards of developing residential projects on the waterfront shores in Ontario ... Read more

Hope Above All – Rebuilding Puerto Rico

Puerto Rico humanitarian missions have left an imprint on locals and volunteers alike It’s been a rough few years for 73-year-old Raul Negron, a farmworker who lives in the remote mountain village of San Lorenzo, Puerto Rico. After his ex-wife suffered mental health issues, his son and daughter were put in foster care. Just after Negron […] ... Read more
Recent Magazine Articles
Archive Categories