Efficient windows and doors continue to make a big impression

Size isn’t everything, but it sometimes seems that way.

“People keep wanting bigger doors—eight feet high and five and six feet wide,” says Muhamed Arbo, owner at Toronto’s Mondo Manufacturing. “Today’s house designs want to let the light in. Architects now are creating homes that are glass from floor to ceiling. And we can do all of it—we just built a tilt-and-turn window that’s eight feet high and about 40 inches wide.”

A quick tour of this year’s Interior Design Show in Toronto revealed one manufacturer after another showcasing the latest in oversized doors and windows—particularly high-quality models. “We’re not Home Depot or IKEA,” offers Sebastien Fournier, V.P. of Business Development at Kadrium/Sésame in Sherbrooke, Quebec, whose company was showcasing room partitions and huge interior sliding doors. “People are more and more looking for high-end custom-made. It brings value to someone’s condo or home. Aluminum and glass design isn’t simply trendy—it’s something that will live forever. Our sliding doors are designed to offer more creative freedom for architects, builders and designers, thanks to all the available opening solutions and finishes. And the quality of our hardware ensures that the doors slide softly and quietly, whatever their dimensions. They’re suspended in the rail, with rolling supports chosen according to the weight of the door. A concealed fixed floor guide guarantees the stability of the door without a floor rail. The doorstops, integrated into the rail, make sure that the door closes in the desired position and are available with a soft-close option. We always have people coming to us who say that can only find this in Europe, not North America.”

“A request we are seeing more often each day is for floor-to-ceiling windows,” echoes Jeff Sadr, CEO of Window City in Vaughan. “However, many manufacturers fall short in making these windows energy efficient. Window City has performed vigorous testing of large windows used in new construction builds to ensure that their energy ratings are on par with (smaller models)—a feat that has proven to be difficult to replicate from other manufacturers. We’ve also further improved the efficiency of large windows by adding LoĒ i89 glass from Cardinal Glass Industries, a new energy-saving glass that offers more light transmittance and less reflectance.”

“We’re also seeing increasing demand. We go up to 3.5 metres (11.5 feet) for a sliding door, and up to 35 feet wide with nine feet per panel,” notes Hamad Waheed of Mississauga-based Bigfoot Doors, whose window and door products are increasing their smartphone remote operation functions. “It’s the level of production that makes us unique. They’re engineered in Germany with Schüco—the premier hardware system in the world—and then the profiles are brought in and manufactured here to their specifications.

“This frame is insane,” says Waheed while holding a cutaway example of the product. “All aluminum with thermal breaks and fully insulated. It’s Passive House-certified.”

And what do you get when you combine the concept of floor-to-ceiling windows with sliding doors? Sliding glass walls! And few compare to NanaWall in that department. “Our gasketing, roller technology and the standard powder coat finish are all superior to most,” says Dar Kofoed, who heads up residential sales for Ontario at NanaWall.

Brand new is the SL8 aluminum-framed system, “the slimmest and most thermally efficient line of folding glass walls available on the market,” says Ebrahim Nana, founder and CEO of NanaWall.

With a frame profile intersection of just 99 mm (3-7/8”), the SL84 provides a new level of aesthetics with the slimmest aluminum profile available and minimal exposed hardware. The system, which has been put through rigorous performance testing for air, water, structural and forced entry, also features continuous seals along the face of each panel frame, with two levels of insulating thermal breaks providing optimal defence from heat or cold.

Depending on the desired glazing of the unit, maximum panel sizes can reach heights up to 11’6” and widths up to 3’7”.

With ever-increasing sizes comes the challenge of retaining energy efficiency, but Energy Star is driving a lot of the industry’s innovation. And standards are increasing, reminds Amanda Soltys, marketing specialist with Golden Windows. “With the upcoming changes to Energy Star Version 5.0, we’ll likely see more of a trend to order more triple-glazed windows,” Soltys says. “Now that (climate) zones 1, 2 and 3 no longer exist, Canada only encompasses one zone, which resembles the old Zone 3 Energy Star specifications. For builders to qualify their homes for Energy Star, windows now have to meet the following compliance paths: minimum ER of 34 or more, and a maximum U-factor of 1.2 or less. In the meantime, builders can continue to install old Zone 2 windows, so long as they are listed on the archived NRCAN list of acceptable windows, which will need to be verified by their energy consultant for each project. Golden Windows is committed to working with builders and renovators alike to make sure that the requested specifications are met for each individual project.”

Jeld-Wen has been a successful player in the Energy Star program. A three-time winner of the program’s Manufacturer of the Year award over the past five years, Jeld-Wen says the company is committed to exceeding the next round of standards. And the introduction of the Northern Tri-Pane Collection supports the initiative. Its True Tri-Pane Technology provides two ½” air spaces, with Low E argon gas. The exterior pane insulates the interior panes and “delivers industry-leading energy efficiency that meets and exceeds all Energy Star 2020 criteria,” the company notes.

Mondo Manufacturing is also embracing the higher standards. “This year might be very good for us because of Energy Star 2020,” suggests Arbo. “We’re already there—we can do triple-glaze and we’re getting everything re-tested so that we’re ahead of schedule.

Arbo’s optimism is buoyed by the possibility of consumer support from the government. “I think there are going to be some incentives for consumers,” he says cautiously.

But it’s the quality of the merchandise that he most believes in. “We’re a mid- to high-end company. Canadian vinyl, Roto hardware, Cardinal glass, made in Canada and feature Super Spacers in all windows (an insulating and energy-efficient glass system where edge spacers are made of all-foam construction with zero metal, giving them low conductivity).”

Mondo, whose niche is the Euro tilt-and-turn window, has added aluminum-clad exteriors to this year’s lineup. “We have it for the Euro and regular casement windows, as well as a new ultra-thin-profile casement window,” Arbo notes. “The style is popular in Quebec and Europe, with a great aluminum look outside that you can powder-coat or anodize any colour. But inside past the clad point, it’s all vinyl, so you’re also getting the energy-saving thermal properties.”

As far as the Euro model goes, “One of the unique things is the concealed hinges, which you can’t see inside the house. It’s a classy, clean aesthetic,” Arbo says. “The second thing is that our frame is 4.5” thick. A lot of the companies who import have 3” or 2.75” frames. So with ours, you have a deeper frame and more vinyl and air chambers inside, so thermal properties are better. You’re also recessing the window a bit, so the wind’s not directly blowing on it as much. We also have a bit of a sill, which is nice since it guides the water away when it snows and rains. We also have concealed drainage holes. The folks with thinner frames have drainage plugs, which you see from the outside.

“Another advantage with the Euro is that you can go really big, because it’s steel-reinforced. And it can also swing inward, which is good for egress. So if you have one in the bedroom or the basement, you can swing it open and jump out of the house if there’s a fire,” Arbo explains. “Then there’s the flex screen. For many, the screen is usually an afterthought—a lot of folks will drill it into the face of the window frame. Ours, though, is basically frameless, sitting inside the window, so it doesn’t ruin the exterior look.

“We’re trying to get the Euro passed as a Passive window to stay another level ahead,” Arbo notes. “It can go from 1 3/8” to 1 3/4” width in a triple unit, and we use two argon chambers and two low-Es. Some cheat and use only one with low-E, one with argon and leave the other chamber empty. But there are no shortcuts. We try to go with the best of the best, because the window industry can be a little grimy—I’d say 80% are low-budget windows.”

Quality products not only keep the heat and cold at bay, but sound as well, Arbo adds. “There is a difference, although it hasn’t been officially tested here. You can also do laminate glass that is really sound-deadening compared to a triple-pane (and more impact-resistant in storm situations). We had one recent client whose room faces the street and he calls and says he had trouble sleeping last night. I said, ‘Oh no—I know we haven’t put the blinds on yet though.’ But he said, ‘No—I’m used to hearing a car come down the street before I see their lights, but last night I didn’t hear anything and just saw the lights and wondered what was going on?!’ And that guy was only on a casement triple-pane, which only goes to 1 1/4”! So it would be nice to get the decibels tested so that we have comparisons moving forward.” 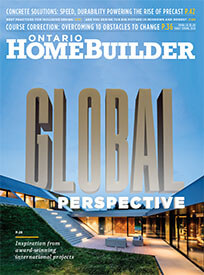