Dog-friendly condos have their own kind of bow wow factor

Pet friendly condos are in demand

As life becomes increasingly fast-paced and task-driven, people are turning to pets for more than just companionship—fur babies can help relieve stres

s by turning our focus to simple everyday pleasures and encouraging us to get outside and exercise. Young couples often adopt pets as a warmup to the responsibilities of starting a family. But as financial security grows more elusive for millennials, many are delaying or even opting out of having children and choosing to spoil Marley instead. 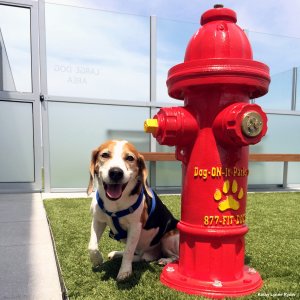 That heightened emotional connection is supported by a 2015 Harris poll of American pet owners, which showed that 95% consider their pets part of the family—up from 88% in 2007. So too are sloppy kisses, doting gazes and wagging tails capturing the hearts and wallets of Canadians of all ages and life stages. In fact, more than half of all households now have pets—about 57% according to Statistics Canada’s 2017 census.

That’s more than a 10% increase over the last decade. The Canadian Animal Health Institute reports that dogs have nearly caught up to cats as the pets of choice, with 8.2 million canines living in households in 2018.

And those numbers are only going to increase. Euromonitor predicts the worldwide growth of pet dogs to jump 18% between 2018 and 2024. The City of Toronto has tried to accommodate the increasing numbers with 66 off-leash dog runs in the city—up from 37 such zones in 2010.

Statistics also point to a healthy upswing in consumer spending on pets. According to the Canadian Animal Health Institute, in 2017 Canadians invested $8.2 billion on pet-related expenses—nearly double that of just 10 years earlier, dramatically outpacing their population growth over the same time period.

There’s little doubt that Canadians adore their pets and are quite willing to splurge to keep them healthy, happy, safe and comfortable. A report by the National Association of Realtors found 81% of homebuyers considered their pets’ needs when deciding where to live. A parallel trend in large cities like Toronto, where buying your own piece of turf is increasingly prohibitive, is the move to vertical living in more affordable high-rises and condominiums.

A corresponding trend has seen a move to more conveniently sized dogs. According to The Economist (“Dogged pursuit: Pet-ownership is booming across the world”), “Early last year the French bulldog overtook the Labrador retriever as Britain’s most popular pedigree dog; pugs were not far behind. In America, the French bulldog has risen from the 58th most popular pedigree dog to fourth since 2002, according to the American Kennel Club.”

Developers are responding to these trends by incorporating features that not only offer comforts for pets, but also make caring for them easier without compromising aesthetics and style.

In targeted markets, integrating pet-friendly features can give developers an advantage over those that overlook these accommodations. Val Rynnimeri, an architecture professor at the University of Waterloo who co-supervised a 2017 thesis on dogs living in Toronto’s CityPlace condo community, explains that while older condo communities were not designed with dogs in mind, new developments cannot afford to ignore them. 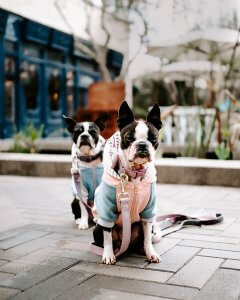 “Nobody imagined there’d be that many dogs, because places like CityPlace had always had transient populations,” Rynnimeri told Toronto’s Now Magazine in 2017. “It was supposed to be for younger people, single people or couples.” Although condos could be retrofitted to become more accommodating by building amenities like outdoor dog runs in the podium level of a building, he believes it would be a lot easier to ensure that newer buildings had dog-friendly elements already in place.

Creating guidelines for new pet friendly condo developments is the idea behind a Toronto City Planning report that’s expected to be released this year. With an estimated three to five pets now living on every floor of a Toronto high-rise, the city wants to ensure new condo developments are addressing the reality of this changing urban landscape. The report will reflect input from hired consultants, residents’ associations, BIAs, dog off-leash park associations and other stakeholders, and might include calls for mandatory on-site facilities like dog runs, washing areas, specialized ventilation to curb pet odours and separate entrance doors for pooches.

Rapid intensification has steadily whittled down urban greenspaces, turning grass and trees into scarce resources, and competition for these resources can sometimes pit the needs of pet owners against other residents. Because cities like Toronto (which already operates more than 60 off-leash parks) say they cannot afford to buy and maintain new park space, the onus is shifting to developers to make pet-friendly condos and amenities available to their clients.

While Toronto’s condo market is one of the fastest growing in North America, local developers can learn from their U.S. counterparts who are ahead of the game when it comes to catering to residents with pets. The Grove at Grand Bay in Florida, for example, offers a deluxe list of features, including a rooftop dog run, a day spa, on-site pet sitting, a retail shop and even a full-time pet concierge who books walks and veterinarian appointments while the residents are out. City Market at O—a pet friendly condo development in Washington, D.C.—has made living with your pooch the pillar of their marketing campaign, with billboards that tout an elaborate rooftop dog run and full-service pet spa.

Dog lovers shopping for high-rise abodes are increasingly selective and are less likely to compromise what they view as essential amenities. According to Condos.ca, an online blog serving Toronto’s condo community, pet wash stations or spas top the list of must-have amenities. Dogs are playful and curious, with noses that often lead them into dirt and muck, so a wash station, with spacious sinks or tubs to accommodate canines large and small, is essential to avoiding messy paw prints on those polished floors.

On frigid winter days when nature calls at odd hours, condo residents would rather not have to walk their dogs to a nearby park—in their pyjamas. Hence, dog runs or on-site greenspaces are the second-most sought-after amenity in dog friendly condos.

And the desire to pamper fur babies and keep them looking their best has many pet owners looking for full-service grooming facilities, where they can drop off Bailey the Burmese mountain dog without leaving the building, and maybe pick up a few treats from an on-site shop. 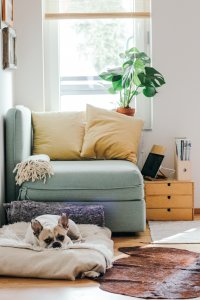 “Lifestyle amenities are key in today’s condo market,” says Romina Cortellucci of The Cortel Group, which is currently working on multiple developments in Toronto and Vaughan. “They not only differentiate buildings from one another, but they also play a big role in creating the lifestyle. A living space that is truly functional has to accommodate the various time constraints of its residents—not only offering variety but also enough breadth to house the traffic that these spaces will experience.” 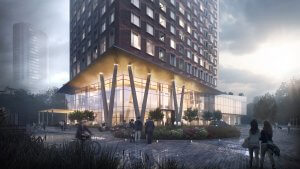 Cortel pet friendly condo properties are designed to appeal both to pet owners and families with young children. Cortellucci points to the company’s careful choice of locations with proximity to greenspace and parkland: CG Tower overlooks the Edgeley Pond and Park in Vaughan, while the Oak & Co project sits directly adjacent to Morrison Creek and an elaborate trail system. Both developments include pet spas with washing, drying and grooming stations, as well as kids’ zones with imaginative explorative spaces for growing children.

Marlin Spring specializes in mixed mid-rise and townhome developments in the Toronto area, where they currently have about 3,000 units underway. The company’s flagship development catering to pet owners is The Stockyards District Residences, a 236-unit building in the city’s Junction neighbourhood that will feature a pet wash area on the ground floor as well as a dedicated dog run. In another nod to pet owners, the company has chosen LVT flooring for its units, which marries a clean, contemporary aesthetic with excellent durability and scratch resistance. 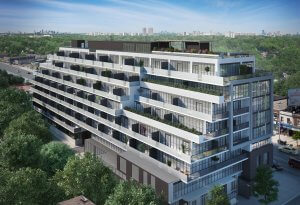 “We recognize that a great number of our purchasers are pet owners, and to make our buildings as pet-friendly as possible (is important),” says Rivki Mandelbaum, Director Corporate Strategy and Communication at Marlin Spring. “It’s extremely important to understand the buying demographic and to respond to their needs. We don’t have a ‘cookie-cutter’ amenities list, but rather, tailor each building to the projected needs and wants of the eventual residents.” 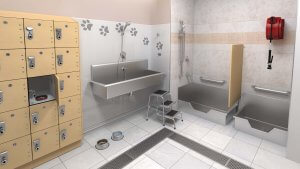 Developers agree that offering custom amenities for pet owners or families with young children enhances the quality of life for all residents in pet friendly condos. “If you create the right facilities, they will ultimately increase the resale value of units, as people want to live in buildings where they can use and enjoy spaces outside of the square footage of their units,” says Cortellucci.

Homeowners with pets living on terra firma are focusing on adapting their living spaces in a way that better serves the whole family, including Benji and Zeus. A report published in 2018 by the U.S-based National Association of Realtors found that 50% of homeowners surveyed took on renovations or made improvements with their pets in mind. Ontario builders and renovators are seeing those same trends play out locally.

Clients building a custom home or renovating are looking for resilient flooring, customized wash stations or showers, built-in feeding stations and, if space permits, special nooks or sanctuaries where the family pet can relax with his favourite stuffy.

Hardwood flooring that can withstand the traffic of a busy family and a large dog is one of the top requests reported by Ottawa custom builder Omega Homes. Owner Jeff Orphanos says that choosing flooring with a lower sheen, lighter colour and a thicker finish is best for families with pets. Durable stainless or porcelain dog showers built into a mud room or in an unfinished basement attached to the garage are also popular requests, as are cameras that allow owners to keep an eye on their pets during the day.

A dog’s life never sounded so good – especially in a dog friendly condo. 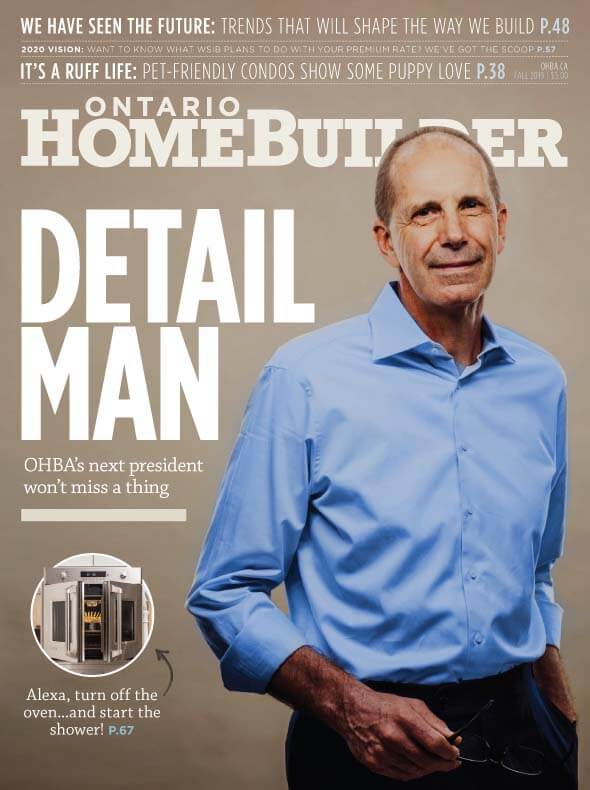 Homes of the Future – Planning For The Future of Toronto

What changes will soon impact the way we live and build? A vision of homes of the future in Toronto In the urban centres of the Ontario of tomorrow, how will we live? Three to five decades from now, will autonomous cars and a seamless transit systems whisk us wherever we need to go? Perhaps […] ... Read more

Incoming OHBA President Bob Schickedanz checks all the boxes On the list of things Bob Schickedanz likes to do, talking about himself is right up there with shoving bamboo shoots up his fingernails. Seated for a lunch interview at Toronto’s Airport Keg, the 61-year-old partner at FarSight Homes is decidedly uncomfortable recounting his lifetime of […] ... Read more
Recent Magazine Articles
Archive Categories