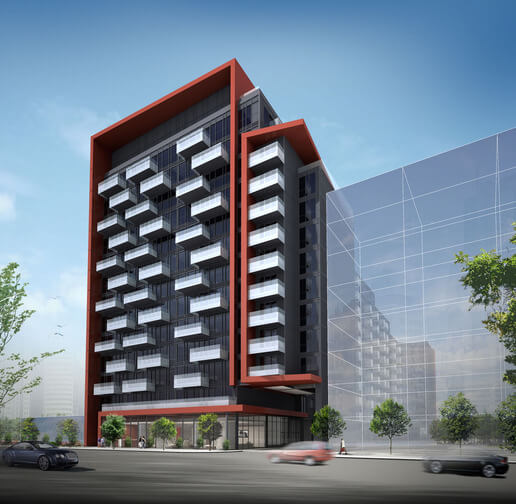 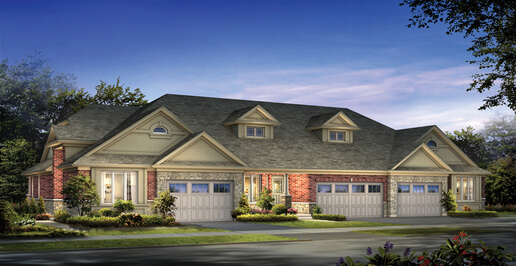 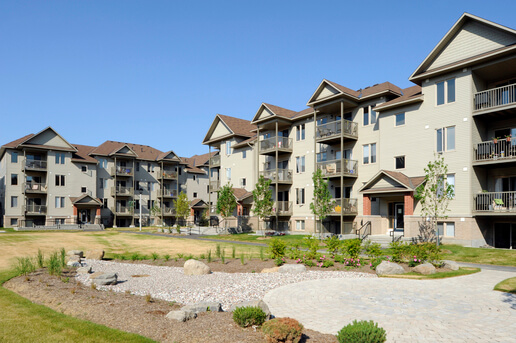 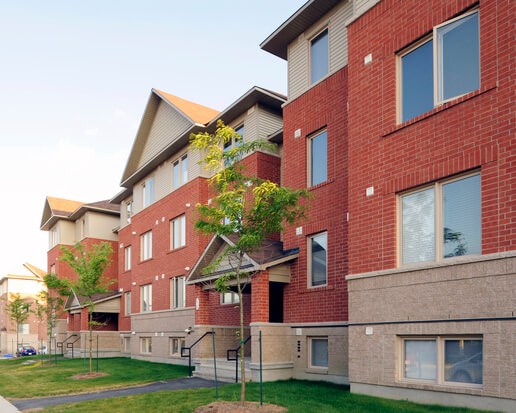 Mike Memme and his partners at Mountainview Homes have a quandary. Their company has been offering the Energy Star label on homes in the Niagara Region as an upgrade option, with about 20 percent of buyers choosing it.

(Photo: Stonefield Flats in Nepean by Minto is the largest certified LEED for Homes multi-family community in Canada.)

Now that the Ontario Building Code mandates that all new homes be constructed to EnerGuide 80 (the same rating as the previous version of Energy Star), Mountainview and other Energy Star builders must decide whether to make the step up to the new version. All Energy Star homes registered after June 30 must to be built to EnerGuide 83, or 20 percent more efficient.

Memme knows how Mountainview can achieve the new Energy Star standard (e.g. with rigid foam insulation, more efficient hot water tanks, drainwater heat recovery pipes) and that it will add $3,135 to the cost of their new homes. “As the new (Energy Star) version is finalized, we are going to try pushing it and see where it goes,” Memme says.

Will other Energy Star builders make the step up to the new version?

“That’s the million dollar question,” says Corey McBurney, president of EnerQuality that administers Energy Star in Ontario. “Anecdotally, we are hearing more positive things than negative. I think by and large, the industry has come to grips with the fact that energy efficiency is built into the building code and, over time, those requirements will increase.”

McBurney says  Natural Resources Canada (NRCan) has been “very generous” with its transition period to the new version.

“It’s not like the clock’s ticking. Builders have two years and that eases the pain. Over the next two years, our push is to work with Energy Star and other builders to get them to the next level,” McBurney says. EnerQuality has started offering workshops on the new generation Energy Star and in late May, will hold a forum showcasing new technologies and techniques, which will be helpful.

He says Energy Star builders have found that there are benefits beyond marketing to building to a higher standard of quality,such as customer satisfaction and builder reputation.

“By lowering the rate of defects, service costs drop and I don’t think those things have been monetized. You get fewer warranty claims and fewer callbacks, which saves you money and your customers are much happier. Some of the more sophisticated builders see the logic of an overall quality program.”

The Minto Group will main its commitment to Energy Star as a standard for all its lowrise homes and LEED for its highrise projects.

“This is great in terms of producing ever-more-efficient buildings, but there are a number of challenges in terms of identifying a consistent mix of design features that can achieve the target levels across our different product types,” says Wells Baker, manager of sustainable development at Minto. “The things you could do for a townhome are significantly different than for a single family home. And some of the marketplace hasn’t yet caught up with what these requirements are requesting of builders. There’s a lot of uncertainty and not everyone knows exactly what the best way is to deliver the Energy Star home of the future.”

But the issues are not insurmountable, say other experts and builders. “Today’s Energy Star builders can get to the next generation with maybe $3,000 to $4,000,” says Andy Oding of Reid’s Heritage Homes, chair of the OHBA technical committee. “We are going to see things such as two-inch rigid foam insulation, underslab insulation and furnaces with ECM motors.”

Air barriers, which typically have been on the inside of homes, will move to the exterior with rigid foam insulation, says Oding.

One of the big issues is HVAC systems, says Oding; as homes become tighter, they have smaller heating and cooling loads and there is a lack of suitable systems. While there are options such as high velocity and combination units (which supply space- and hot water heating), “we need to make sure these systems actually work. There are currently no standards for high-velocitysystems in Canada. The whole HVAC industry needs a tune-up and new design criteria.”

Building science trainer Gord Cooke, president of Building Knowledge, agrees there are HVAC challenges but manufacturers are working on them and he’s confident “they will step up.” Cooke says many of the Energy Star builders he works with plan to make the leap to the new version: “Most of them are going to stick with Energy Star, because that’s where they want to be.”

He says there are three paths builders can follow: To improve the envelope of the house through measures such as under-slab insulation, better windows and improved airtightness; to opt for mechanical solutions with more efficient HVAC equipment and water heaters; or to choose a renewables path with products such as heat pumps and solar panels. Cooke says HRVs and airtightness measures offer “the biggest bang for the buck.”

“It might be most cost effective to do little bits from all the paths,” Cooke suggests. “If builders are mid-stream through a development, it may not be practical to look at the envelope, as all the contracts will have to change, the scope has to change, so they might want to look at the mechanicals instead. The beautiful part about this is: people have a path forward they can plan for.”

Cooke adds “We now have a minimum Code, Energy Star, R2000 and LEED, which are nice stepping stones for the builder community and builders who want to be ahead.”

Mason Homes, one of the province’s first Energy Star builders, is using what it learned through an Enbridge market transformation program (offered to 21 leading green builders in Ontario) to help it get to the next Energy Star version for a townhouse project in Barrie. A half-day session to identify issues was followed by a full-day charette with experts in everything from storm ponds to solar panels to mechanical systems.

“It was really powerful and unbelievably interesting to have that kind of brainpower in one room helping you,” says Sean Mason, director of sales and marketing for Mason Homes.

Mason says a result of the charette, his company is looking at technologies such as new air-source heat pumps, rigid foam insulation and how they lay out their lots on a site to help with the building form.

The Energy Star leap up won’t be a problem for Empire Homes, which builds Energy Star as standard in its lowrise developments, including in Binbrook, Breslau and Brantford. “We are already at the next generation of Energy Star with our Eco2 packages that we have been offering for the past three years,” says Gary Botelho, Empire’s home energy specialist. The homes come with features such as meters to track real-time energy consumption, drainwater heat recovery pipes and compact fluorescent lights.

(Photo: Tridel’s Reve is an energy efficient, environmentally friendly condominium registered as a LEED candidate with the Green Building Council.)

For builders considering making the jump to the new Energy Star, Botelho has this advice:

“Work with your trade partners, work with suppliers, see what they have available. Do a test home or build a Discovery House and get experience at the one-off level to see what transpires,” he says. “There is always going to be a learning curve. If everybody put their heads together, they will find it easier to get to the end goal. If you are doing this for the first time, it’s going to take longer. Never expect to get it right the first time. Be aware of the level of preparation that needs to be done and check off everything in the planning stages.”

While the new Building Code will strive for a similar EnerGuide rating as the old version of Energy Star, there are some key differences, according to Andy Oding of Reid’s Heritage Homes and chair of the OHBA Technical Committee.

“Building Code SB-12 homes have the option of prescriptive or performance paths and the prescriptive path doesn’t require a blower door test,” says Oding. “And while you might have windows that are low-E argon, that’s fine, but with Energy Star, all windows have to be certified Energy Star. The new Building Code also doesn’t require HRVs, although some paths give that option.”

Oding says when the new Building Code came in, there were some last-minute discussions to get the Ministry of Housing to implicitly spell out that Energy Star houses meet the new Code.

“The biggest problem isn’t so much the ability of the builder to get to EnerGuide 80, it’s the administrative changes, such as filling out paperwork and understanding the additional inspections,” says Oding. “That’s the biggest hurdle for the industry and building officials.”

Products for the Next Generation

Furnaces with ECM Motors
Electronically Commutated Motors operate with as little as 80 watts of electricity and use up to 75 percent less energy than standard fan motors.

Drainwater Heat Recovery Pipe
This technology is simple, has no moving parts and is not expensive. It recovers heat from hot water going down the drain and transfers it to warm cold water before it goes into the water heater. A pipe can reduce household energy use by 5 to 10 percent.

Two-inch Rigid Foam Insulation
Rigid foam insulation has several advantages for insulating exterior walls. It is highly moisture-resistant and will not harbour mould. And it is very effective in achieving greater airtightness.

Through LEEP, developed by Natural Resources Canada’s CanmetENERGY, member builders of HBAs throughout the province learned about emerging technologies and practices and chose those they found most useful. The follow-up TAP phase facilitated application of the technologies in the builders’ Discovery Homes.

The builders have  identified a ‘Winners’ Circle’ of next generation technologies and practices that will be showcased at a builder forum and trade show May 30. Some of the identified products include Insulated Concrete Forms, passive solar design, exterior insulated sheathing, combination heating systems, zone heating, etc.

Ontario Power Authority
The OPA offers financial incentives to builders who install electricity-saving features in their new homes, such as all-off switches, high-efficiency furnaces with ECM motors, Energy Star-qualified air conditioners, lighting, etc. Builders can choose prescriptive, performance or custom paths. For the prescriptive path, incentives range from $3 to $50 per feature. Houses that achieve EnerGuide 83 or 84 are eligible for a $500 rebate, while those that are EnerGuide 85 or better are eligible for $1,000.