Not counting what’s not reported, it’s estimated that there were more than $24 billion in  renovations in Ontario last year.  To say it’s a burgeoining industry is to understate the point.  Consequently, claiming the inaugural Renovator of the Year award is no small honour for OakWood Renovation Experts.  The Ottawa based firm, which boasts 58 years of design and build experience, completed an estimated 420 projects last year – 15% jump over the previous season. Its proudest achievement may well have been a project in the Glebe neighbourhood , just south of downtown Ottawa.  The five-month renovation of a two-storey home saw the owners request a more open-concept kitchen and the conversion of a four-season room into an exercise area.  In order to achieve this, the powder room was relocated and walls removed.  The existing kitchen was also completed revamped – its fooprint being altred by removing a few interior non-load-bearing walls to maximize the used of the space. The existing U-configuration was changed to a galley style, while the additions of a taller window allowed for more natural light.

A brick veneer was installed on the chimney, harmonizing the theme throughout the main floor—specifically the sunroom—as well as the exterior facade.

Classic and traditional styles are celebrated with the usage of the dual-colour palette for the cabinets: Cognac for the base and Coffee Cream for the uppers. The clients can now showcase their dishware with the usage of glass inserts accented by darker back panels, which provides a nice transition from the darker base to the lighter uppers. A coffered ceiling is both an aesthetic and functional element, as it frames electrical fixtures and adds architectural detail.

Dark tiles were replaced with new 2.25” site-finished oak hardwood, which features a touch of early American stain to brighten the space.

The powder room was relocated to a more accessible and functional location in the four-season room, where new large stained wood windows were installed. The existing window, opening in the new powder room, was used as a frame for the wall mirror, which is a great way to integrate the existing elements with the new ones.

The entire project was completed without losing the interesting architectural elements of this traditional Victorian-style home.

OakWood’s busy schedule and proud achievements aside—its most expensive being an Ottawa-area project that rung in at $547,280.24 (before taxes)—it’s staying current that has helped the company retain its momentum for almost six decades.

“We are constantly trying to make our company better and to enhance the customer experience,” says Patricia Liptak-Satov, OakWood’s

Chief Operations Officer. “This has led to us implementing several new offerings, one of which is the design and current build of our 22,000 sq. ft., LEED Platinum new headquarters building, which is currently slated to be the highest-rated LEED Platinum building in Canada. Homeowners visiting this building, which is also our design centre, will discover a multi-media environment where they will be able to select from hundreds of thousands of design options and discover right away whether their selections will be right for their homes.” 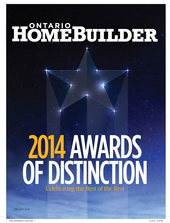 Straight to the Point