How to manage the mess and protect your project

Why cleanliness on job sites is important

Job site cleanliness is a high priority with home owners

Contractors know about client stress. They’ve all seen how having one’s home torn apart for weeks on end—even by choice—can sometimes test the bounds of rational thought and behaviour.

But if you really want to send your customers over the edge, try leaving tools lying around for the kids to find or muddying up their carpets in an already tense environment. Now you’re just asking for a thermonuclear-type explosion.

It’s not just shoddy reno work that helps fill the internet, after all; it’s the preventable sloppy treatment of a customer’s home during a project. So in a world where word-of-mouth references reign, contractors who go the extra mile for the sake of safety, job site cleanliness and efficiency tend to be remembered for all the right reasons.

Specializing in water, smoke, fire and storm damage, among other tasks, Shane Bradley, president of Highland Restoration in Orangeville, appreciates the stress levels of his clients. Consequently, minimizing mess and disruption while preserving the functional use of the rest of the home so that occupants can continue to live normally is the top priority of his company. That entails containing the work area, protecting other living spaces, removing and storing furniture and using specialized “negative air” machinery during reconstruction to prevent dust from circulating through the house. Highland adheres to a set of standard operating procedures according to job type, which guides the flow of work (including job site cleanliness) and communication with homeowners.

On the home renovation front, many OHBA contractors have similar procedures and best practices in place to minimize mess, damage and homeowner disruption, swearing that the extra effort and cost is worth it when weighed against the possibility of having to re-do completed work, repair damage, keep a good rapport with customers and maintain a solid reputation.

“We spend a lot of money on protection and coverings, and we always get complimented by clients for our cleanliness,” says renovator Dave Jurinic of Toronto Custom Concepts (TCC). “On day one of the reno, we cover all the floors—not just with construction paper, but with a foam underlay and hardboard (masonite) to protect the floors, then paper on top to capture the remnants of drywall mudding and dirt, which we replace regularly. Depending on the job, we will also wrap stairs/runners in clear adhesive plastic.”

To block off work areas and access points for dust and dirt control, Jurinic installs vertical sheets of polyethelyne (supported by extendable poles) with zippered exit and entry points, “sticky” mats at entranceways on rainy days to remove dirt from boots, and filtration cloths in ductwork. His trades are instructed to always clean up the waste they create and sweep their workspace regularly. And in case they forget, TCC also hires a general labourer for overall cleanup and to tidy up missed areas. Additionally, a cleaning company is hired to come on site at least twice during the project: after drywall is finished and upon completion.

“The challenge is protecting what we’re not changing,” notes Jurinic. “We’re always sensitive to the fact that our clients are living there and want to see progress.”

According to Randy Oke, president of Oke Woodsmith Building Systems in Grand Bend, scheduling, communication, safety and job site cleanliness are mandatory to a successful renovation. “Because we also design most of our projects, the challenges of renovating are always top of mind,” he says. “This means: working out the timing with deliveries of products and having each phase of the project coincide so there’s less disruption for the homeowners, securing the site with fencing and proper guards and keeping the site tidy and clean at all times, which also makes work and timing flow more smoothly.”

And what do things look like when those sorts of steps are not part of the equation? Jamie Adam, head of OHBA’s Ontario Renovators’ Council and president of Kitchener’s Pioneer Craftsmen, describes an addition (by an unnamed contractor) in an older part of town. “It was spring, and an excavator on the site left mud tracks on the street and the sidewalk, and mud was continually being tracked into the addition,” Adam relates. “The homeowner was living through the project, with nails, two-by-fours and concrete all over the site. It was a messy and unsafe place—a total disaster.”

How should the process commence? “We start every project with a preconstruction meeting at the client’s house, which includes our lead carpenter, our project manager, our salesperson and our client, where we go over a list of 20 points covering off, among other things, what we will do to maximize safety and minimize damage and mess,” says Adam. “That way, our client knows what to expect.” To keep the site tidy, Pioneer employs a number of techniques and products. Inside the home, foam padding (a cost-saving off-run dashboard material used in car manufacturing) protects floors from damage, such as a dropped hammer. Sticky clear plastic is laid out over carpeting and neoprene on stairs. Installed fixtures (sinks, tubs and toilets) are protected by keeping on the coverings from the manufacturer and, in some cases, painting on a temporary rubber membrane.

During tear-out and drywalling, Pioneer minimizes dust and dirt in the home in several ways: cordoning off work areas with poly plastic with zippered doors for easy entry/exit; installing strong fans and three-stage air filters, including high-efficiency particulate air (HEPA); and, if needed, placing a fan in a window to create negative pressure to help draw out dust.

“We do what we can to minimize dust, but we always advise our clients to be aware that any pre-existing dust on walls and ceilings in their home will be dislodged during construction,” says Adam, adding that his company’s policy is to broom-clean the site at the end of every day and vacuum each Friday.

And what about outside the home? “When we’re excavating, we cordon off and secure the site with snow fencing or security fencing to keep it contained, making sure that we designate what’s in-bounds and what’s out of bounds for debris,” Adam adds. “To keep mud and dirt out of the home, we install heavy-duty track mats on lawns and leading up to entranceways over the work week, removing them on weekends.”

Does Adam see the payoff in such precautionary measures? “Definitely,” he declares. “You’re saving money in the long run. It’s better spent versus having to refinish work and deal with a homeowner who’s freaked out.”

Amsted Design-Build in Ottawa has earned numerous honours for its reno and building projects over the years, including multiple awards from OHBA, CHBA, Greater Ottawa Home Builders’ Association and Guildmaster (nine years in a row), the latter a trade association that celebrates service excellence in building, remodelling and contracting based on customer satisfaction surveys (Amsted consistently scores 100% for job site cleanliness and safety.)

According to president Steve Barkhouse, Amsted has earned its many accolades by adhering to strict worksite principles. “Starting from the outside of a project, there’s a fence around the site and everything is stored and tarped, so that it all looks nice and clean from the street,” he says, adding that the company’s own branded roll-off bin on site reads: “94% of materials will be recycled.”

Inside the home, Amsted employs a host of containment measures, including plastic enclosures, vacuums and HEPA/exhaust fans. But they also make sure their project partners are all on board.

“Every year, we invite our trades to breakfasts, barbecues and tailgate meetings to talk about accountability on the job,” says Barkhouse. “We want to make sure that everyone takes the extra time to pick up debris, re-tape, etc., because a clean workspace is a safer place. We also post signage on the jobsite to remind everyone about our core values, including job site cleanliness. Our staff are trained on Ministry of Labour safety standards, which cover things like guard rails and extension cords. And every week, we talk about safety.

“There’s 100% accountability and there’s 200% accountability. That’s what we strive for,” Barkhouse adds. “It means being responsible not only for your own actions but also the actions of co-workers. Everybody watches each other’s backs.”

Barkhouse cites the story of a hospital in the U.S., where patients were dying of unrelated infections at an alarming rate as a result of staff passing on diseases from room to room. A policy promoting personal responsibility (100% accountability) for diligent hand-washing was initiated by the hospital, but after two months, there was little improvement. So the hospital went a step further, encouraging all staff to faithfully wash their hands and remind other staff, even doctors, to do the same. The infection rate dropped dramatically.

“Practicing that 200% accountability on the jobsite means that the guy pushing a broom can call the electrician on a safety or cleanliness issue,” says Barkhouse. “There’s a consciousness of someone always watching to make sure things are done right. It’s a culture where everyone understands.” 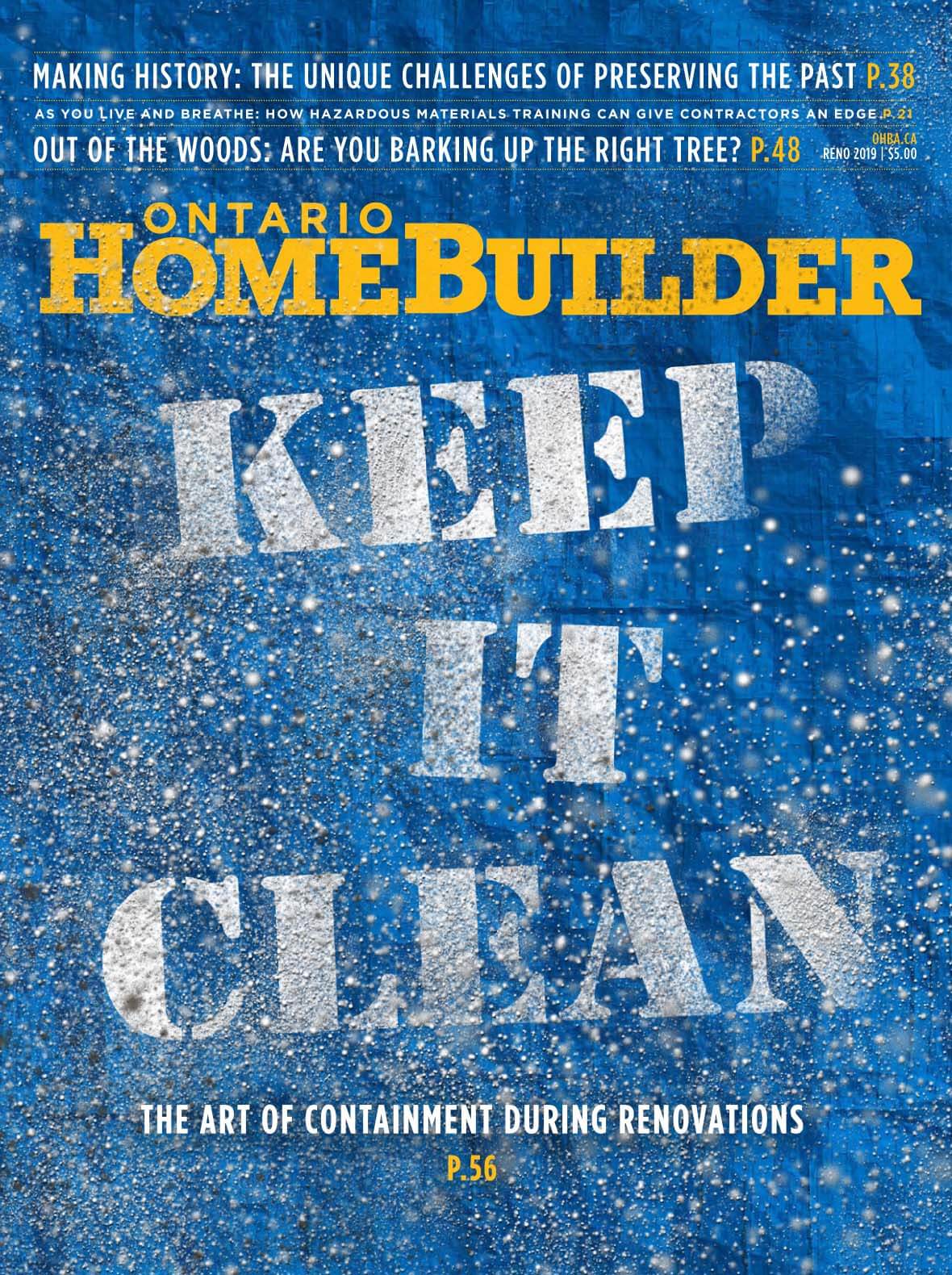 Home Renovation Guide – Is Everybody Happy?

Keeping a reno rolling smoothly from end to end A home renovation guide from the professionals Even the most straightforward renovation project usually has bumps along the road before it reaches a successful completion. Juggling a host of subtrades, each with different skill sets and levels of ego, while managing clients’ expectations, is a fine […] ... Read more

The technical, legal and physical challenges of preserving the past Preserving heritage homes for future generations We’ve all heard the expression “if these walls could talk.” For the builders and renovators who work with aging houses and buildings, the stories those old walls have to tell are often not pleasant. Dealing with rodents, faulty wiring, […] ... Read more
Recent Magazine Articles
Archive Categories