In April 2017, the Liberal provincial government rolled out the Ontario Fair Housing Plan (FHP) to cool the Greater Toronto Area’s red-hot real estate market and to improve affordability. A 15% foreign buyers’ tax was the centrepiece of the 16-point plan, while another key measure expanded rent control to include all private rental units in the province.

Although foreign buyers constitute a very small segment of the market (only 3.4%, according to CMHC research), the market abruptly cooled and average real estate prices fell 20% from April to August 2017.

While the FHP may have had some positive spinoffs, such as lower prices for buyers on the low-rise resale side and more renter protection, industry experts don’t believe the Fair Housing Plan will have much long-term influence, although it will negatively impact the rental sector.

“I don’t think the measures that came in had that much impact,” says Peter Norman, chief economist at Altus Group. “Market turbulence started happening prior to the announcement and it’s a coincidence that things slowed just as it was introduced.” Norman says most FHP measures, including the Foreign Buyer’s Tax, were pretty narrow and benign.

Norman says several factors (looming tighter lending policies and interest rate hikes) conspired to push prices upward for a short period of time in early 2017, but “that doesn’t go on forever” and only lasted a few months. The market took a pause and buyers decided to step back.

However, the condo market was unscathed by the Fair Housing Plan, as sales soared to record levels (with 36,429 new units sold) in 2017 and the average price rose by 41% over 2016 to an average $716,000. Some of the drivers included demand from end-users who could no longer afford a single-family home and adjusted their expectations; and heightened investor interest due to the rapid price increases.

“The move made a big splash and prompted people to take a step back and see what was happening in terms of sales,” says Jason Mercer, director of market analysis for the Toronto Real Estate Board. “Anytime there’s a large-scale policy move, people who are flexible—who don’t need to buy or sell right away—step back and see where they stand in the market.”

“It no doubt had a psychological impact and took froth out of market,” agrees Tim Hudak, CEO of the Ontario Real Estate Association (OREA). “Buyers became more cautious and adopted a ‘let’s wait and see what happens’ behaviour. But even before the Fair Housing Plan, the market was starting to experience a natural moderating influence.”

Norman says that since June 2017 prices have been stable and rising, and in April 2018, prices were stronger than in June 2017. “Price pressure has come back at a modest level and although there is some turbulence, the market is stable and well behaved.”

Some neighbourhoods beyond the 416, where prices escalated quickly during the early 2017 run-up, are still feeling the chill from the rapid cooldown, says Ben Myers, president of Bullpen Research and Consulting. “The FHP definitely had an impact on markets that were more bubble-ish than others, such as Richmond Hill, Aurora and Markham.

“The low-rise market will have a slow recovery,” Myers adds. “The single-family market is still re-adjusting and people are nervous about buying a new home because they don’t know what they’ll get for their existing home, so aren’t listing them.”

Factors such as interest rate hikes and tighter mortgage rules are pushing buyers down the property ladder and those who would have looked at single-family homes are being confined to the condo market due to prices.

Myers says in early 2017, many buyers moved out of the Toronto area to places such as Kitchener-Waterloo, Stoney Creek, Grimsby and Barrie, consequently driving up prices in those places. “Then people in those markets moved out even farther,” Myers notes. “There was a secondary impact on markets 90 minutes away from Toronto. There isn’t so much (of that) move-out market now and we are seeing price adjustments in secondary markets.”

The quick cooling of last year’s market post-FHP created issues for many new-home builders and developers, says Myers. “They sold at elevated prices then and don’t want to drop pricing. Some developers who bought land five years ago are launching 30% above their pro forma. Others will wait it out, shut their sales offices and wait for the market to come back, as it always seems to.”

Builder Mattamy did drop prices at one of its new-home projects in Whitby in early 2018 to reflect the market, which upset some buyers who had purchased similar houses at higher prices during the hot market a year earlier.

Reaction to the Fair Housing Plan

What does have the experts concerned is the FHP’s impact on the rental market. While its measures were meant to provide more affordability, it’s been more of a detriment, as rent increase limits may discourage investors from buying condos to rent out, and builders from constructing apartment buildings.

“The imposition of 1970s-style rent control is going to stifle rental housing and limit choice,” says OREA’s Hudak. “With less supply, and if mom and pop investors move out of the (condo) market, rental stock will deteriorate.”

Long term, that will impact society’s most vulnerable citizens the most, Hudak says, including seniors, young people and immigrants, as they have less choice and less quality to choose from. Those who are on the margin of affordability will become homeless or will have to look to social housing, Hudak adds.

“If you’re an investor facing any kind of cost increases and you have a ceiling on your ability to raise rents, you may choose not to invest in rental units,” echoes Mercer. “The economy in the GTA is good, unemployment is low and it’s an attractive place to live and work. People may want to move here and rent, but the prospects for new supply aren’t great.”

Myers suggests that while the province wants more rentals and has committed to making an investment (although that may change with the new Ontario governing party), the typical condo developer isn’t interested in purpose-built rental buildings. Condos are selling well, the value is high and “why move from a model builders know to a model they don’t?” Myers asks.

He says new rental units will come from private money, real estate investment trusts and investment funds that are considering rental buildings in prime locations. “These are not going to be cheap rents, though. They are going after the luxury renter.”

The other problem is that the rental units that are available tend to be small suites, so people won’t lock in long-term, as most will eventually need a larger unit. Under the FHP, investors are limited to a maximum of 2.5% annual rent increase as long as the same tenant stays, then can reset the rate when a new tenant moves in. With the high concentration of compact suites, that’s not ideal for families or people looking for larger suites.

While the FHP aimed to improve affordability in the GTA, it’s actually done little to address the issue. While low-rise prices did fall, most average prices are still beyond many buyers’ budgets—which is why the condo market has enjoyed strong sales and surging prices.

A large part of the housing supply constraint is attributable to the lengthy time it takes to get approvals for projects. Although a Development Approvals Roundtable Action Plan was created as part of the FHP including representatives from municipalities, provincial ministries, OHBA and the Toronto Real Estate Board, Mercer says no concrete action has been taken, whether it’s to expedite the approvals process or promote building of the “missing middle” (stacked townhouses and mid-rise housing).

“The city wants to promote and approve apartments in certain locations and people want to bring forward mid-rise projects along avenues,” says Norman. “But then the application gets opposed and it has to go through a lengthy council process. In the end, some get built.”

The doubling of development charges in Toronto is also making it difficult for developers to keep costs down, says Norman, and new condo prices are now $1,000 per square foot or more in desirable locations. “Looking forward, the government needs to focus more on the supply side and how to bring more housing on stream, whether it’s owned or rental,” says Mercer.

“All levels of government have been piling on the backs of the real estate sector, with the Fair Housing Plan, increased land transfer tax, higher interests and the new stress test,” says Hudak. “The cumulative impact has hurt the chances of people to get into the market and caused economic loss. We need to focus on bringing down closing costs, for example, or helping first-time buyers by reducing or eliminating the land transfer tax, and we need to increase the supply of housing.”

“The broader perspective is that there is still a supply constraint,” says Norman. “We have record migration and have never seen numbers so high. When that’s translated into potential household growth, we should be seeing 45,000 to 50,000 net new households a year, and we haven’t seen that before. There is pent-up demand and there will be price pressure on the market.”

While the FHP and mortgage stress test caused some “modest turbulence” according to Norman, “people are still ready and willing to buy. They will buy a smaller house or move further out. It hasn’t removed the demand; it just paused it.”

Myers says the condo market will remain robust, but with more building completions happening this year, there is going to be a supply reprieve in the second half of the year and that may have a moderating effect on sales.

Mercer says the Toronto Real Estate Board’s prediction for the first half of 2018 was that the market would be slower than last year, but expects people will start moving back into the market. “We are seeing tighter market conditions than a few months ago and certainly there’s a lot of competition in some neighbourhoods,” Mercer notes. “People see housing as a good investment. Prices are a bit lower than a year ago and that will prompt some people to move back into the market.” 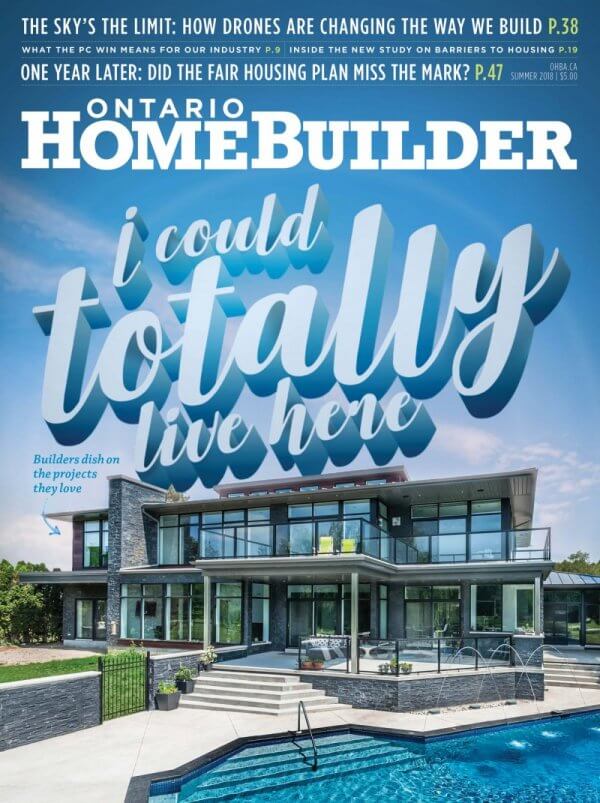 They spend their days building other people’s dream homes—but if they had their choice, which of their creations could they see themselves living in? We asked some OHBA member builders and renovators, who have crafted some memorable and award-winning houses, for their picks on the residences they’d be happiest to inhabit. Custom homes for all […] ... Read more

Drone Footage for Real Estate: An Eye In The Sky

Drone use takes off in residential development Off-plan sales media with drone footage is popular Look up. You might see the home building industry changing right before your eyes. Then again, you might hear it first—that telltale buzz of multi-prop unmanned aerial vehicles (UAVs), better known as drones. Want to see what your new subdivision will […] ... Read more
Recent Magazine Articles
Archive Categories