Radon-induced lung cancer kills more than 3,200 Canadians each year, according to Health Canada. It’s a sobering thought. Next to smoking, this is the leading cause of lung cancer deaths in our country. To put it another way, radon gas kills more Canadians than residential fires. And yet more than 600,000 homes across Canada are estimated to have above-guideline radon levels.

The good news is that much of the danger is avoidable. There is a growing legion of accredited radon mitigation specialists, while the measuring devices are getting more sophisticated. From a construction standpoint, measures can be taken, while radon remediation of an existing home costs approximately $3,500. 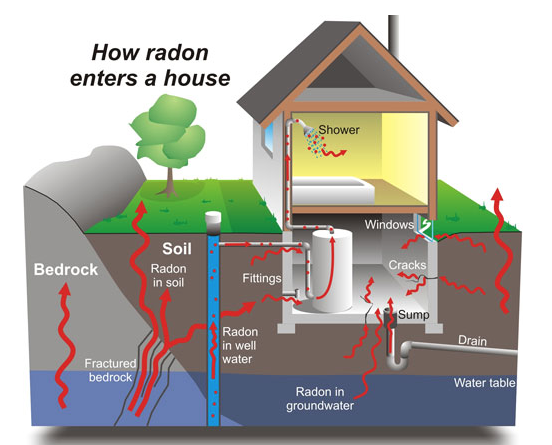 How Radon Enters a House

A little background: Radon is a naturally occurring radioactive gas generated from the natural radioactive decay of uranium. It’s usually found in igneous rock and soil, but in some cases, well water. Radioactivity is measured in units called Becquerels (Bq). One Becquerel corresponds to the transformation (disintegration) of one atomic nucleus per second. Radon concentration in the air is measured by the number of transformations per second in a cubic metre of air (Bq/m3). According to the World Health Organization, “the lower the radon concentration in a home, the lower the risk of lung cancer, (but) there is no known threshold below which radon exposure carries no risk.” That said, Health Canada has established a ceiling of 200 Bq/m3 for indoor air before remediating action must be taken.

Over the past couple of years, the Ontario Home Builders’ Association has been participating in an ongoing study with the Radiation Safety Institute of Canada to determine levels of radon in new homes across the province. Doug Tarry, co-owner of St. Thomas-based Doug Tarry Homes, appreciates the issue more than most. In 2015, a client of Tarry’s reported testing her home at 384 Bq/m3 on a 48-hour test and wanted the building company to buy her home back. Tarry, who was OHBA Technical Chair at the time, was already involved in the joint study, says this incident was a “big deal with enormous financial implications.” It also made the home builder realize that radon is everywhere. 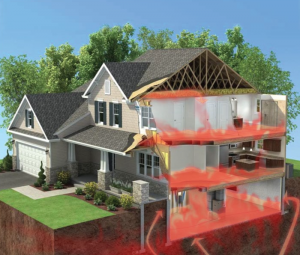 It is important to note that if a home tests positive for radon, it’s not the builder’s fault or attributable to a poorly built home. You cannot see, smell or taste the gas. It can enter houses through a variety of ways, including cracks in the sub-slab or walls that are in contact with soil, gaps at floor/wall joints or through porous concrete block, open sump pits and openings around utility penetrations, floor drains with no traps and sump pits, and emissions from water (particularly ground or well water). Radon is extremely radioactive, emitting alpha radiation as it decays. Once inside the lungs, it can genetically damage delicate tissues, which can lead to the development of lung cancer.

So if radon gas seeps into the home from the surrounding rock and soil, how do you protect a home? Doug Tarry Homes provides an excellent case study. Each year, the company builds approximately 50 homes. If you multiply that by seven years, at an estimate of $3,500 per home to remediate any home for possible radon exposure, the total gross comes to $1,225,000. Certified in radon mitigation, Tarry feels it’s a pretty good investment spread over that many years.

The 2015 OHBA Member of the Year, Tarry has been a tireless advocate for improving the safety of homes, and now has two staff members who have passed their Radon Measurements Qualification Exam and are now moving toward full certification. As of January 1st, 2016, all new homes in all markets Doug Tarry Homes’ serves have been built with a mitigation system (soil gas collection pipe and a soil gas barrier) as a proactive approach to limit the possibility of radon. If radon is later found, the soil gas collection pipe can easily be made active very cost-effectively by using an inline fan to exhaust the sub-soil gas from beneath the basement floor.

Tarry says they’ve also worked to educate local building officials in all markets they serve to make sure they understand these details and can properly and effectively inspect residential installations so that there is third-party verification that the rough-ins have been installed properly. Tarry has also pledged to existing customers to honour any requests to have their homes tested and provide a copy of the lab report, following national inspection guidelines. If radon is found, the company will remediate the customer’s home by installing an active in-line fan system, or other approved measure, so that they can ensure the home is safe.

Illustrating the growing trend of awareness, November 2016 marked the first Radon Action Month in Canada. Throughout the month a variety of stakeholders from varying sectors (NGOs, charities, health and public health organizations, radon professionals, government, builders, academics and retailers) and from all provinces and territories encouraged Canadians to take action on radon.

In 2010, the National Building Code of Canada introduced radon-related measures, stipulating that new constructions should include rough-in for mitigation. This was just a guideline, though. It was up to each province to adopt the measures and/or choose not to implement them. In Ontario, the current provincial code only contains specific provisions and required testing for the following three regions: the City of Elliott Lake, the County Of Hastings and the District of Sudbury.

Still, results from a two-year study conducted by Health Canada’s National Radon Program indicated that 6.9% of Canadians are living in homes with radon levels above the current guideline of 200 Bq/m3. That means builders are legally obligated to monitor for such guidelines, given the Ontario Building Code mandate to provide a dwelling that offers “a safe living environment.” The OBC is likely to make radon mitigation a requirement during the next round of code changes.

While the OBC requires a home to be covered for seven years after its completion, in May 2015, OHBA took more proactive measures on the radon issue when it signed a memorandum of understanding (MOU) with the Radiation Safety Institute of Canada (RSIC). In this MOU, both parties agreed that radon is ubiquitous and is found everywhere in Canada and each organization will do their best to prevent cancer from exposure to this chemical.

The RSIC was created following the Elliott Lake uranium mining disaster in the 1970s, where workers were exposed to unacceptable levels of radioactive gases. The Elliot Lake tragedy led to the appointment of the Ham Commission, which helped pass one of the most significant pieces of worker legislation in Ontario five years later with the Occupational Health and Safety Act.

Jason Sadowski, Laboratory Manager at the RSIC, says builders need to be aware that radon is everywhere—that you can’t just look at the radon map Health Canada produced and the statistics to determine the likelihood of radon in your region. “The conditions in a particular area can vary from home to home. Every home should be tested. People need to be aware that it is a hazard. Regardless of construction types, the only way to know if you have radon is to test for it,” says Sadowski, whose organization offers test kits for homeowners.

It can also be a complicated process. According to Tarry, the OBC contains a logic trap concerning radon. “The OBC states that where radon is known to be a problem, you have to install radon mitigation or soil-gas measures. The OBC also states you have to install soil-gas control unless you can demonstrate that it is not required,” Tarry notes. “However, the Code is silent on how to test for radon and has already declared three problem areas.
The logical conclusion then is that radon is not an issue in my area, therefore I don’t require soil-gas control. That’s the logic trap. It gets you to the wrong answer and full liability exposure.”

How does Tarry advise OHBA members to escape this trap? By being proactive and understanding that radon is present everywhere—in every home. And the only way you can test for levels
within a home is by using a long-term 90-day test after the home has been closed. That might not be in the OBC, but it is in Health Canada’s Guidelines. Since builders cannot demonstrate whether radon is a problem during construction or even before permits are granted, builders and developers should be proactive and install soil-gas controls to help prevent them from being open to any future liability from not doing so.

The best remediation methods prevent the ingress of soil gases into the home via radon-proof materials and soil membranes. The best solution is sub-slab depressurization by installing a fan that exhausts the air from below a foundation to the outdoor air. This doesn’t give soil gas any chance to get into the house.

Tarry says he wants to send a positive message to other OHBA members. His best advice is to not be afraid. “Embrace this,” he says. “You want your customers safe, happy, and healthy in your homes. We put effort into installing smoke detectors and HRVs for fresh air, etc., so how and why is this any different?”

“If you have uranium of any form underneath or near your home there is a high probability it will come into your home,” says Tarry. “It’s just the luck of the draw; it’s everywhere in North America.”

Tarry also stresses the importance of testing older homes. “If you are having work done to your house, make sure you renovate with someone who understands radon and is either a specialist or trained in remediation,” he concludes. “You need to understand. The house is a system. If you make a change in one area, it could open up issues in another area of the home.”

A risk-based approach is where mediation and remediation works best, according to Frank Lohmann, Radon Manager, Codes Development System for the National Research Council Canada / Government of Canada. By 2020, he believes there will likely be changes to the National Building Code that reflect this and include even stricter measures and a more clearly defined national standard for protecting homeowners from the possibility of radon.

“Of all the hazards we have in the world, this one is fairly well known,” Sadowski says. “I wish we knew as much about other carcinogens as we do about radon. (But) people tend to balance their risk based on cost. They are willing to accept a certain level of risk if it doesn’t cost them much. The best way to bring costs down is to implement mitigation at the time a new home is built. After construction, mitigation is more cost-prohibitive and to fix an existing home is much harder.”

Cost is also front of mind for builders, but image might be a bigger concern. “It’s about money and fear,” says Tarry. “I believe dollars is the lesser part. It’s more about builders feeling that they don’t want to be branded as building a bad house because people are afraid they will get sick. What I tell other builders is that I’ve never been busier. I give my customers full disclosure and they are thankful that we are taking these precautions. We tell them we want them to have the healthiest home possible and they are thankful we are making their home safe.”