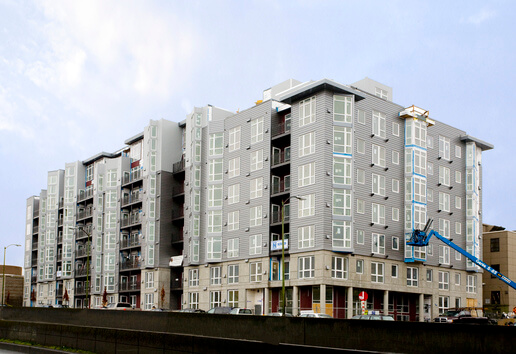 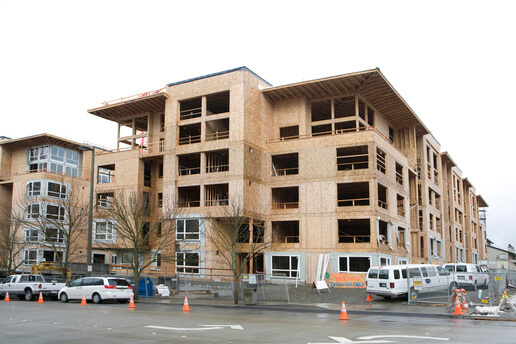 In 2009, the province of British Columbia, endowed with bountiful forests, changed its building code to allow for the construction of wood frame residential buildings up to six storeys. In the same year, a nine-storey wood frame apartment building was erected in London, England. Sweden boasts a seven-storey wood structure, and Australia will soon claim the world record for the tallest building of this kind—10 storeys.

Meanwhile in Ontario, the provincial Building Code has limited the height of wood frame buildings to only four storeys since 1992. Ontario’s building industry would like to see this height restriction bumped to six. At a May 22 news conference in downtown Toronto, with the mid-rise Toronto Community Housing Waterfront Development Project under construction in the background, the OHBA, BILD (Building Industry and Land Development Association), RESCON (Residential Construction Council of Ontario) and the Canadian Wood Council held a news conference to release a report calling for changes to Ontario’s building code to allow for safe, affordable wood frame housing for residents in the Greater Toronto and Hamilton Area (GTHA).

“We would like the Ontario government to change the code to allow for six-storey wood frame construction to help unlock the immense potential in neighbourhoods that have underutilized land on major avenues and corridors,” said BILD President and CEO Bryan Tuckey. “It’s good urban planning, and it’s good for future homebuyers in the GTHA and across Ontario.”

The extensive report, titled Unlocking the Potential for Mid-Rise Buildings: Six-Storey Wood Structures, was commissioned by BILD and authored by former City of Toronto Chief Planner Paul Bedford. It contains strong planning and economic development rationales for amending the Building Code. “Our report shows that underutilized lands in the GTHA are often well served by existing infrastructure and transit,” said Tuckey. “Mid-rise buildings can help meet the demand of the growing population, offering a variety of sizes and design features for people of all ages.”

Citing the Building Code change in British Columbia as a case study, the report predicts more affordable options for new home buyers and a minimized carbon footprint as benefits of wood frame construction, along with more construction jobs and increased tax revenue from additional residences.  Tuckey estimates that mid-rise buildings could house up to 100,000 people in the GTHA and stimulate the local economy by creating 50,000 jobs.

The report is enthusiastically supported by Toronto’s building and planning departments. Jennifer Keesmaat, City of Toronto Chief Planner, stated in an interview that there is “an absolute urgency to move (the) six-storey wood (proposal) forward.” She believes that changing the Code would lower building costs and help to relieve urban congestion by offering residents affordable homes close to where they work. “There is now a shift to create sensitive and compatible housing in low-rise neighbourhoods situated within corridors that are well served by transit, schools, shopping and amenities,” said Keesmaat. “Mid-rise, six-storey wood structures present the opportunity to build our avenues in a way that is compatible with low-density residential neighbourhoods and allow for an affordable choice in the housing market. This is an essential initiative for our city.”

City of Toronto Chief Building Official Ann Borooah also fully endorses the report. “In 2001, we urged the province to make this change to the Building Code, but it was rejected,” she says. “There is an excellent opportunity now to review Building Code changes across Canada. We’re urging the province of Ontario to coordinate with national efforts and work with Ontario’s building industry on this important initiative.”

Places to Grow is an Ontario government legislated program that plans for growth and development in a way that supports economic prosperity. Over the next 30 years, the growth plan forecasts than an additional 4.4 million people will live in the Greater Golden Horseshoe and the legislation encourages future development in built-up areas on main streets instead of allowing continuous urban sprawl. Mid-rise buildings located along the urban corridors of Ontario cities are a vital component of Places to Grow and are included in almost every regional and municipal plan in the province.

From a cost perspective, wood frame construction is a significantly more economical alternative to poured concrete for mid-rise buildings. The report estimates savings of $30 to $40 per square foot, or up to 20% over steel and concrete, with a cost saving on a 1,000 square foot home of $20,000 to $25,000. “Wood is good, but Ontario wood is better,” declares Leith Moore, President of the OHBA and Vice President of Development at Sorbara Development Group. “There’s pressure in the GTHA right now to build affordable mid-rise housing. Concrete is just too expensive for this type of construction. Wood frame is lighter, faster and more adaptable to pre-fab. And Ontario, with its vast reserves of forests, offers an affordable and home-grown solution to the mid-rise housing demand.”

In 2012, a private-members’ bill introduced by Nipissing MPP Victor Fedeli, the Ontario Forestry Industry Revitalization Act, tried but failed to amend the province’s Building Code to include six-storey wood frame buildings. Leith Moore believes that wood construction could revive Northern Ontario’s ailing forestry industry. He envisions ships sailing the Great Lakes from the north to Toronto harbour, laden with Ontario lumber to meet the demands of new mid-rise construction in the GTHA.

Needless to say, Ontario’s forestry industry welcomes the idea. “It’s not just what we presently are that defines our sector; it is what we can be,” says Jamie Lim, President and CEO of the Ontario Forest Industries Association. “By changing Ontario’s Building Code to allow six-storey wood construction, we will create a level playing field in mid-rise construction and create a critical market for Ontario wood products in our own backyard.”

A major player in Ontario’s construction is the cement industry. According to recent Ontario Ministry of Natural Resources statistics, the province consumes about 179 million tons of aggregate (including sand and rock used to make cement) per year, one-third of which goes to the GTHA. That amounts to roughly 14 tons per Ontario resident per year. In an article penned by this writer a year ago about public opposition to proposed mega-quarries in Ontario’s Southern Georgian Bay region, an aggregate company executive stated that reserves are becoming scarce—not due to lack of availability but because 95% of potential quarry sites in Southern Ontario are inaccessible due to various environmental restrictions, such as wildlife, groundwater, wetland and natural heritage preservation.

According to the Ontario Ministry of Natural Resources website, Ontario’s forests cover two-thirds of the province. Almost 90% of these forested lands are provincially owned Crown land. Carefully managed to ensure the long-term health of forest ecosystems, Ontario wood is among the best-managed natural resource in the world. Wood building material is local, renewable and recyclable, requiring little energy in its production (compared to steel and concrete). More than 75% of wood used in Ontario wood products (including construction) comes from trees harvested from sustainably managed Ontario forests.

Environmental, social and economic benefits aside, the Cement Association of Canada (CAC) is not pleased with the efforts of BILD, OHBA and RESCON to change Ontario’s Building Code. In a press release coinciding with the May 22 news conference, the CAC expressed “tremendous disappointment with those members of the building and construction industry who have called for changes to the Ontario Building Code to allow construction of six-storey wood-frame buildings.”

Last year, in an Ottawa Sun article that cited a fire in 2011 in Richmond, B.C. that destroyed a six-storey wood building during its construction phase, the Fire Fighters Association of Ontario stated that allowing six-storey construction “increases risk to the public and firefighters.” However, in addition to its arguments for changing the Ontario Building Code, BILD and RESCON also commissioned a complementary report, “Mid-Rise Combustible Construction in Ontario—Building Code Issues,” which investigated fire safety issues related to the increased use of combustible material in construction. The report concluded that the number of fire incidents does not increase due to more use of combustible materials in buildings. Further, a study of data collected by the National Fire Incident Reporting System showed that fire incidents are more often related to the use and occupancy of buildings rather than to the type of construction used in buildings.

The position of the Canadian Wood Council (CWC) on the issue is that the risk of fire is greater during a building’s construction than when it is occupied. In cooperation with Natural Resources Canada and other partners, the organization prepared a technical document, “Fire Safety and Security,” examining the causes of construction fires and outlining steps that should be taken on construction projects to mitigate the risks. Marianne Berube, Executive Director of CWC and Ontario Wood Works, added that the National Fire Code and regulations in Ontario’s Occupational Health and Safety Act contain many provisions for construction projects that address potential fire hazards and provide solutions to reduce risks. “Wood frame buildings have to meet the same standards as those built using other materials,” she says.

Safety, affordability, liveability and sustainability—changing the Ontario Building Code to allow the construction of six-storey wood frame buildings would unlock the immense potential of a new mid-rise market throughout the GTHA, the Greater Golden Horseshoe and in many other Ontario cities. As a major step in achieving the intensification goals of the province’s Places to Grow plan, the move would increase the variety of living choices, while realizing cost savings for new home construction and for new home buyers.