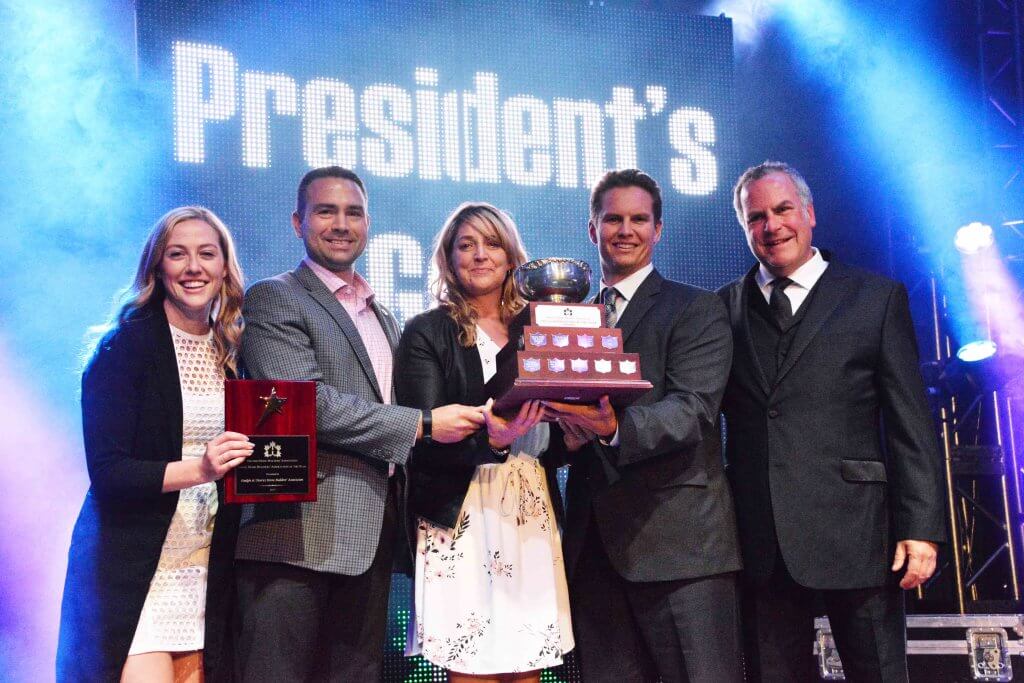 PIONEERING IN SUSTAINABILITY, ENGAGMENT AND OUTREACH

Guelph and District captures OHBA Local of the Year

When they announced us as the winner of Local Association of the Year at the OHBA President’s Gala and listed our accolades, it really brought home all that we have achieved in the past year. We’re immensely proud and honoured to receive this award,” says Stacy Cooper, Executive Officer of the Guelph and District Home Builders Association (GDHBA).

At the gala, incoming OHBA President Pierre Dufresne praised the association for its achievements in a number of areas. “There are so many shining stars in the Guelph and District Home Builders Association membership who have demonstrated outstanding leadership in building better homes and truly innovating building science and sustainable technologies,” he said. “Guelph and District Home Builders Association also invests in their members—new members can only be brought on if they have a mentor, which helps ensure and promote a culture and legacy of lifelong learning.”

First and foremost among the local’s accomplishments is the enthusiasm and pioneering spirit of its members in advancing Net Zero Energy (NZE) home building and technology. “Steve Wright of Wrighthaven Homes laid the groundwork and got the ball rolling with his NZE building practices,” notes Cooper. “Jennifer Weatherston, Director of Innovation with Reid’s Heritage Homes [builders of five NZE homes in Guelph’s Westminster Woods community], played an integral part in advancing NZE. This year, she received the EnerQuality Leader of the Year Award.

“We like to say that we’re ground zero for net zero. The biggest players in the field are all here,” adds Cooper. Among that group is building science authority Andy Oding of Building Knowledge Canada, who was involved in the building of GDHBA member Reid’s and Whitehaven NZE homes, as well as Andy Goyda, Canadian Builder Lead with Owens Corning Canada, who played a vital role in Canada’s Net Zero Energy Project, which involved Goyda’s company, Natural Resources Canada, and 25 builders across the country.

Guelph and District Home Builders Association members were also instrumental in gaining impressive media coverage locally and nationally for Guelph’s NZE accomplishments, advises Cooper. “Our association made it all possible through facilitation, collaboration and sharing best practices with the industry. Together, we’re a powerful advocacy group.” Those achievements aside, the GDHBA has been actively involved in engagement and outreach with its community and local government.

“Beyond their own membership, GDHBA also seeks to connect meaningfully with the community by initiating various local in-kind sponsorships, hosting product showcase and dinner meetings open to the public, and partnering with school boards to pilot a co-op program to better expose students and parents to skilled trades,” observed OHBA President Pierre Dufresne at the President’s Gala. The association continues to be intensively engaged with the City of Guelph, meeting and corresponding regularly with City officials as well as local MPs and MPPs to discuss building industry issues.

“Our relationship with the City is one of mutual respect,” says Stacy Cooper. “Under the leadership of the mayor and the Deputy Chief Administrative Officer, we invited each other to talk about development policies, collaborating on positive policy changes in line with the City’s ‘Get to Yes!’ mandate, which pledges to make it easy for developers to do business with city hall. Ours is a solid professional relationship with the same goals in mind.”

In its efforts to foster skilled trades in the community, the GDHBA, in partnership with the Upper Grand District School Board, established a pilot program to educate elementary and Grade 9 students and their parents on the popular misconceptions and positive attributes of working in skilled trades.

“We’re taking a three-point approach to education: addressing the stigma of the industry trades as a transient, second-rate choice of vocation; working with our members to create opportunities for training; and collaborating with the school board’s ICE (Innovation, Creativity and Entrepreneurship) initiative to set students up on the right path to skilled-trades jobs in the industry.”

On October 26, key GDHBA members hosted the first Residential Construction Day for co-op students. “So far, our skilled trades pilot program has been a huge success—so much so that we plan to implement it in schools across Ontario and maybe eventually Canada-wide,” says Cooper.

CENTRAL TO THE THEME Losani Homes brings a slice of the Big Apple to Hamilton Intriguing, challenging, innovative, attractive, game-changing—call it what you will, but Losani Homes’ Central Park project in Hamilton has garnered more province-wide interest than any development in the Stoney Creek builder’s 40-year history. But this year’s OHBA People’s Choice Award winner, […] ... Read more
Recent Magazine Articles
Archive Categories