You would have thought we had arrived on another planet when we first stepped off the plane. Indeed, as we made our way to our hotel in Reykjavik, one of the tour participants remarked that he imagined this is what Mars must look like.

However, it was the natural environment and the effects on that landscape throughout history that was the driving force behind choosing Iceland as a destination for OHBA’s first International Housing and Energy Study Tour.

Iceland is known as the ‘Land of Fire and Ice,’ due to its numerous volcanoes and glaciers bordering the surrounding Arctic Ocean. The nation’s volcanic zones hold enormous geothermal energy, something the locals have capitalized on to generate electricity and heating solutions for the country.

Sponsored by EnerQuality, and with 18 delegates from across Ontario in tow, the OHBA Housing and Energy Study Tour provided a valuable opportunity to get a closer look at Scandinavian architecture, how developers have employed the country’s incredibly innovative technology and how the city of Reykjavik in particular utilizes it within their infrastructure.

Although Iceland’s geothermal resources have been in use in some capacity since the time of the Vikings, it wasn’t until the mid-1900s that the country began experimenting with pumping water directly from volcanic thermal resources through city infrastructure as a source of heat. This renewable resource helped put them on the map as a leader in harnessing emission-free energy.

By financing thermal and electric power plants throughout the country, as well as the infrastructure required to deliver hot water to homes, the Icelandic government eliminated the country’s dependence on fossil fuels. According to Reykjavik Energy, Iceland’s power and utility company, the use of geothermal energy has replaced 560,000 tons of coal (or 360,000 tons of oil) for heating the capital city each year. The National Energy Authority of Iceland notes that the use of geothermal and hydro power in Iceland has prevented 250 million tons of carbon dioxide from entering the atmosphere.

To get a better idea of how this energy is being pulled and distributed in residential units, the tour set off to visit a pair of building sites. Our first day started off with a walking tour of Reykjavik, where participants learned about the history of the city and country. At City Hall, a scale model showed participants how vast the network of volcanoes was that supply geothermal energy to the country.

Reykjavik has the charm and feel of a European country, but with a North American twist. While centuries-old European cities evolved with compact city centres, Iceland’s infrastructure has more of a North American feel. Similar to how many Ontario communities were built, Reykjavik was intended to be the epicentre for work, while most housing was constructed in lower-density neighbourhoods just outside  the city. Also mirroring Ontario, Reykjavik planners are now looking at ways to build up rather than out as the population grows, and are utilizing infrastructure more efficiently to prevent congestion problems from people commuting in and out of the city.

Our first site tour took us outside of the city to a mid-rise housing complex. This entire neighbourhood of low- and mid-rise condos will be using geothermal energy to provide heating and electricity—something 89-92% of the nation’s infrastructure, housing included, is now harnessing.

The tour allowed members to see how this resource is distributed amongst the units. The hot water that heats and supplies energy for these housing units is pumped 32 kms from the plants that store and distribute the resource, but still maintains a temperature of 81°C.

Our second site took us to a high-rise project on Reykjavik’s waterfront. At the tallest building in Iceland, with units that start at a $1 million, participants were fascinated by the sheer size of the system required to pump hot water throughout the building.

That evening we heard from a well-known architect in Iceland, Hildur Gunnlaugsdottir, who walked us through the vision for Reykjavik, including the creation of complete communities and the development of a public transportation network, which is a challenge due to long winters and public stigma, as most locals rely heavily on cars.

We started our second day with a visit to the Hellisheidi power plant, the largest geothermal plant in the country and the second-largest of its kind in the world. The plant is located on the still very active Hengill volcano in southern Iceland and provides electricity to the city of Reykjavik.

The geothermal power plant uses 500 kg/s of 180°C geothermal steam for electrical production, extracted from 30 wells ranging from 2,000 to 3,000 metres in depth. Getting a firsthand look at these plants showcases the magnitude of the resource available at their fingertips.

Geothermal energy has also been a positive factor in developing Iceland’s horticultural industry. Its ready availability has enabled the country to operate greenhouses 365 days a year and to develop a booming agricultural industry. After touring the Fridheimar Greenhouse Farm, powered by its own geyser, we were treated to lunch made from ingredients grown in the greenhouse.

From there, tour guests visited the famous Golden Circle, featuring Gullföss, Europe’s largest waterfall, and the Strokkur Geysir. Following that, we hiked through Iceland’s national park and traversed our way along the tectonic rift that separates Europe and North America.

Our last evening in Iceland commenced with aperitifs sponsored by CIBC at the Einar Jonsson Museum and was followed by dinner at Kolabrautin in the Harpa Concert Hall.

While the tour departed Iceland fully appreciating that Ontario lacks the capacity of that nation’s awesome geothermal resources, they gained an appreciation for the future of smaller, locally based applications of renewable energy here at home.

And maybe for the local weather. 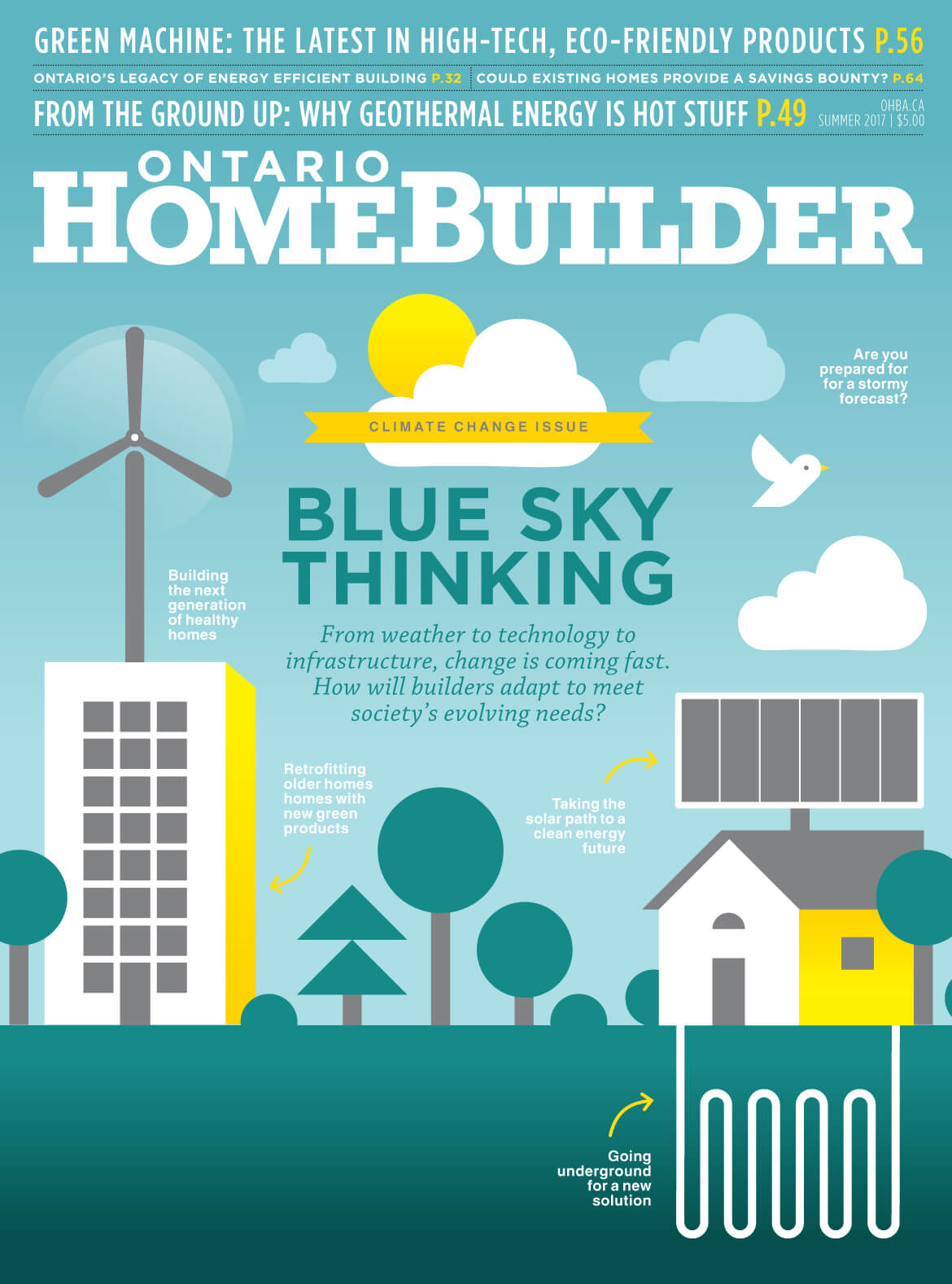 Shrinking the Carbon Footprint One Home At A Time

With land hard to find, homes increasingly unaffordable an the financial stability of young Canadians in question, what does the future hold for builders? ... Read more

With a little push from the government and economies of scale, geothermal energy could be the wave of the future ... ... Read more
Recent Magazine Articles
Archive Categories