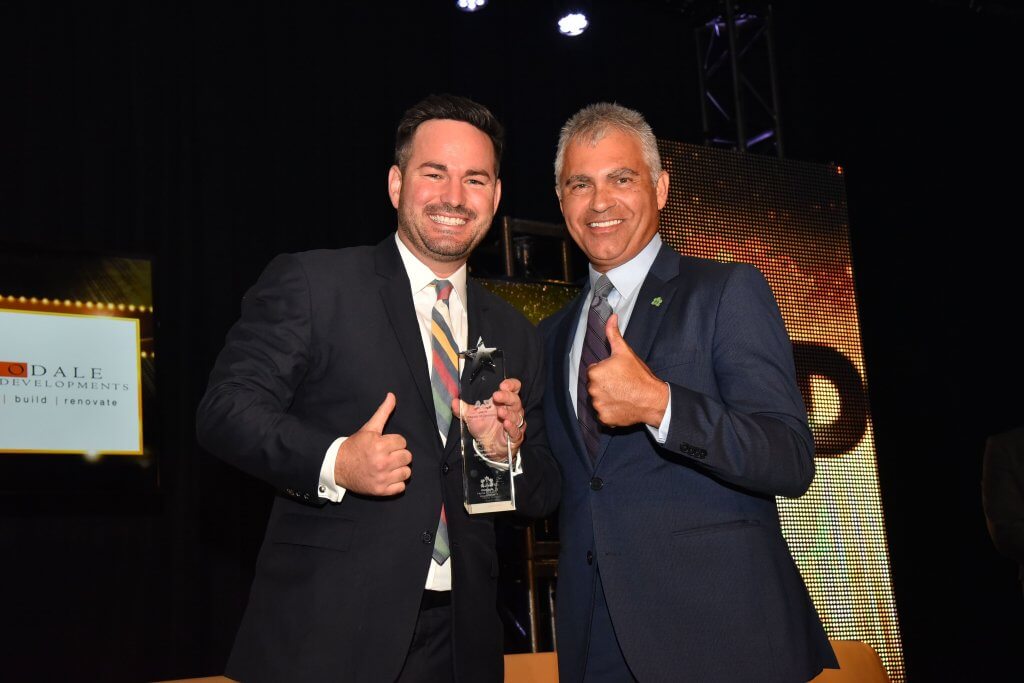 Eurodale says renovator awards are important for consumers too

Word of mouth is as important to the structural integrity of a renovation firm as any concrete foundation or steel I-beam, suggests Jim Cunningham of Eurodale Developments, whose firm claimed the Renovator of the Year award at this year’s OHBA Awards of Distinction.

“We want to make sure at the end of the day the client is happy with the house, and when we’re gone we want them to speak highly of it,” says Cunningham, who, along with partner Brendan Charters, owns and operates Toronto-based Eurodale.

“I’d like to be able to bump into those clients in the grocery store, even 10 years from now, and still have a great relationship with them.” Building good relationships is paramount when you do not partake in advertising and rely strictly on referrals.

Key to that pursuit is involving your clients in every step of their home rebuild. “Any opportunity we can, we try to introduce them to new technologies and ways to help reduce the carbon footprint, like putting in solar panels, radiant floor heating—that sort of thing,” says Cunningham, who notes that Eurodale uses greywater on the worksite wherever possible.

“We have to consider each individual house and look at ways to make it efficient. Not everyone wants to spend money. Some items require money and some items save them money, so we have to educate them, to show them all the options and give them that decision, because what they decide today will affect their lives and their wallet as well—both now and down the road.”

This year’s Renovator of the Year award is a validation that Eurodale is doing things the right way, suggests Charters. “For us, it’s important because it’s our peers and people who are the voice of the industry saying, ‘Hey, of (of all) members, we think Eurodale is the cream of the crop.’

“For us its also a testament to us pushing the boundaries—not just the changes in the building code and that sort of stuff, but being in the forefront of leading technology and making sure we participate in the research and trials of these technologies, so that we can implement them into our clients’ homes in interesting ways,” Charters adds.

Cunningham and Charters are also strong believers in giving back to the community. “We do a charity run with BILD (Building Industry and Land Development Association) and we’ve been involved with Habitat for Humanity for six or seven years now,” says Cunningham. “We donate stuff to Habitat—anything we can. From a builder’s perspective, when we’re on a Habitat site, we’re there to lend a helping hand and we know it’s going to someone who needs that help.”

Eurodale has also lent its expertise to future tradespeople. “George Brown College has had some events at which Brendan has gone to speak to the students,” Cunningham explains. “We’ve also had students come to our sites to see how a jobsite operates, and we have summer students in our office to learn about the industry. We try to employ students so that they can see that you can get a good job in construction and renovation.”

Those students bear witness to the team effort required in a successful firm—right down to every staff member on a jobsite, says Cunningham. “Many brains will help devise a strategy that will work for this or that individual job.” “We surely couldn’t get to where we are as a business without the help of everybody who works for us—the guys in the field, the people in the office, our families that supported us—and it’s important to acknowledge that,” echoes Charters.

“This is not a one- or two-person effort; it’s everybody doing their best to deliver for the client. But without the customers giving us the trust and confidence and handing over the keys to their house and allowing us to rip it apart and rebuild it, we wouldn’t exist.”

Such awards are also of great value to consumers, notes Charters, “because it shows the work that the leading professionals in this industry are doing and shines a light on those companies that take their businesses seriously, their customers seriously, their social responsibilities seriously and who are willing put forward a consistent effort to deliver for every single customer.”

CENTRAL TO THE THEME Losani Homes brings a slice of the Big Apple to Hamilton Intriguing, challenging, innovative, attractive, game-changing—call it what you will, but Losani Homes’ Central Park project in Hamilton has garnered more province-wide interest than any development in the Stoney Creek builder’s 40-year history. But this year’s OHBA People’s Choice Award winner, […] ... Read more
Recent Magazine Articles
Archive Categories