The rise of the bathroom sanctuary

In the 2022 National Kitchen + Bath Design Trends report, NKBA members were asked to predict the average footprint of bathroom projects of a typical client over the next three years. Twenty-four percent said that footprint would stay the same. The other 76% ranged from “larger” to “significantly larger.”

Again, that was for a typical client.

At the luxury level, the square footage increase knows no bounds—and the budgets are following suit.

“For the longest time, bathrooms stayed the same size,” notes Tricia Zach, head of research for the NKBA, whose association membership includes 1,294 Ontarians. “People worked within the existing walls. But now—and we saw this coming pre-Covid—we’re seeing the walls come down and spaces getting larger. As I walked the floor at KBIS (the Kitchen & Bath Industry Show) in Orlando in February, you could see how it’s taken off to the next level. With bathrooms, it used to be, ‘You rush in, do what you need to do, and rush out.’ Now we’re seeing coffee stations, lounge areas, huge wet rooms—a place you want to spend more time.”

As with other areas of the house, open concepts in the bathroom “are something we’re seeing in modern home design,” says Rebecca Muise, senior project manager at David Small Designs. “But it truly comes down to personal preference—whether you like the privacy, or you’re comfortable in an open-concept bathroom layout. We’ve had some clients request separate ensuites—one for each spouse.”

Aleksander Krsmanovic of Ottawa renovation company and custom builder OakWood has also witnessed the rise of the at-home spa experience. “Due to the pandemic, I think more people have been looking for a luxurious, calming space that is just theirs. I tell clients that bathrooms are where they can do something completely different and allow the space to have its own personality.”

It’s a similar story for Ali Rockliffe, co-owner and construction manager at Oakville’s Rock Cliff Custom Homes. “A lot more requests for spa-like bathrooms—steam showers, a sauna in the bathroom, larger windows,” Rockliffe says. “We’ve even had a recent request for an ice bath in a spa bathroom—with an icemaker. The bathroom is attached to their weight room.”

And where is the inspiration coming from? The NKBA report cites travel, at 55%, as the primary influencer. “I have a Luxury Bath Study coming out in June, and I can’t tell you how many designers and their clients told me the same story about how the vision came to be,” Zach relates. “Many designers even start by asking, ‘What is your favourite hotel?’ And the client says, ‘What does that have to do with it?’ But it often has everything to do with it. They visit that luxurious five-star hotel because of how it makes them feel, how they’re indulged, how they’re spoiled. And the bathroom and spa are usually a big part of it. That, in turn, inspires what these designers are bringing into their new projects.”

That includes “more walk-through showers, fewer thresholds and higher ceilings,” says Eve Claxton, one of the two principals at Guelph-based builder Claxton + Marsh. “We’re making it much more grand, with floor-to-ceiling windows that are frosted or opaque in key areas, versus having window coverings.”

Although removing tubs in order to increase shower size is increasingly popular with most bathroom projects—with 75% of NKBA members citing the trend in the study—that’s not the case in the luxury sphere.

“Even clients who never use them, or who might bathe less often than showering, prefer to have them in the principal ensuite,” says Claxton. “And the tubs they’re coming out with have such beautiful designs, such as Bagno Italia, Knief and Slik Portfolio. Stone tubs, beautiful lighting, unique shapes—there’s so many innovative options out there right now.”

And a tub in the principal bedroom is compulsory, says Claxton. “If I was walking in to buy a home and it didn’t have a bathtub in the master, it would certainly be a reason for me to reconsider the purchase of that home.”

Zach agrees. “I hear designers say, ‘It depends on the age of the client. Tubs are hard to clean, often hard to get in and out of, and it can take a while to fill them.’ So they’re often less attractive to older homeowners. But the number-one rule in real estate is that every home needs a bathtub. How do you bathe a young child? And at the luxury level, every single designer we spoke to had showers and tubs. And a beautiful freestanding tub can be a focal point.”

“Focal-point soaker tubs are more common—either positioned in front of a window that captures a beautiful view, or an intricately designed feature wall,” echoes Muise. “And large showers are a regular request in luxury home design, often with multiple showerheads.”

“Wherever possible, you’re seeing the shower get larger, especially two-person showers,” adds Zach, who also notes the rise of curbless showers and all-in-one wet rooms with less shower glass and fewer walls and doors, including no separation between shower and tub spaces.

What’s in a Name?

At a product level, the manufacturer label is not a deciding factor in client decisions, says Zach. “This year, we’ve tried to really understand the role that brands play,” she says. “But what is interesting is that we found a three-to-one ratio against brands being very important. It’s more about customization. Personalization distinguishes a luxury from a non-luxury space. Designers can layer on the details, where every square inch has something that’s amazing that’s geared toward the homeowner lifestyle—from music and layered lighting to warming drawers and his-and-hers water closets.”

But what did stand out on a product level for Zach at KBIS? “One of the coolest things I saw was a body dryer from Valiryo, where you don’t need a towel to dry off after a bath or shower. And there was smart glass from a company called Gauzy, which features dimmable shading or can be adjusted to become opaque through remote control or voice command.

“On the toilet side, we heard a lot about the Duravit, Toto Neorest and Kohler Veil,” Zach adds. “And I thought the Kohler Stillness tub was also amazing. There were all different shapes, sizes and materials of freestanding tubs. Victoria & Albert, MTI’s Juliet, Marsala and BainUltra got a lot of mentions. There was even a tub that filled from the ceiling. Admittedly, luxury homeowners take more risks because they can afford to replace something like that if it doesn’t work out.”

In terms of product finishes, “clients are moving away from chrome,” advises OakWood’s Krsmanovic. “The use of softer tones like brushed nickel and brushed stainless are more prominent. However, a lot of clients are using matte black, which was on the upswing even before the pandemic.

“For cabinetry, there are a lot of different trends happening,” he says. “For example, the vanity may be a way for the client to add a natural wood element. It is easy to get carried away with white and grey in a bathroom to make it feel open in airy, but over time it can feel clinical.”

Technology, expectedly, will play a huge role in future bathroom designs, including the luxury realm, according to the NKBA study. “Voice-activated lights, mirrors that hook up to Bluetooth, intelligent toilets, voice-control showers and mood lighting, smart control for flooring/shower shower heating are all on the upswing,” Zach notes.

“TVs in mirrors are much nicer—fully integrated,” offers Rockliffe. “And there are more Toto toilets and electronic showers with controls that look like rocket ships.”

“The introduction of digital showering has streamlined the aesthetic,” Claxton observes. “Rather than a series of valves and trims crowding the shower walls, they are replaced with a compact unit to operate everything—more simplicity, but still with more overall function. We’re also getting a lot of multi-function shower units—new showerheads that are almost two feet wide, with options for rain, waterfall, cascade and mist for the ultimate shower experience.

“We’re seeing more aesthetics as bathrooms become a feature room,” Claxton adds. “People are doing much bolder things. We’re tiling walls, doing slabs instead of tiles, cladding cabinets with stone, adding intricate details and mouldings. Instead of it just being functional, people want to make it a showpiece—to make it more like that exclusive hotel experience.”

Part of that experience can include saunas and steam showers, but careful consideration is required, cautions Zach. “Some clients we’ve heard from love their steam shower, but some wish they hadn’t bothered. This is one of those areas where custom designers need to have a detailed conversation with their client. We heard one client say the addition of steam required them to seal the shower up to the ceiling. ‘Now we have the shower door standing open and in the way to avoid the shower smelling musty,’ they said. Fortunately, most companies that work in this space have thought through these type of details, like ventilation.”

Claxton is not a huge fan either. “When you’re talking about aesthetics at the luxury level, the limitations required for steam showers just don’t allow for creativity in design.”

And while NKBA members cited Gen-Xers (ages 41-56) as providing most of the work, with half of the overall projects in 2021, sumptuous bathroom spaces can also be compatible with ‘living-in-place’ design, Zach suggests. “It’s best if the builder/contractor bakes it into the design and not make a big deal about it,” she says. “You can reinforce the walls and have hidden grab bars— elements that will keep the homeowner safe before they actually need it. You can have two water closets—one beautiful and one adaptive. Motion-sensing night-lighting and illuminated light switches. Touchless faucets for arthritic hands. Non-slip-flooring. The bathroom will function longer than had they rejected some of these elements in the original plans.” 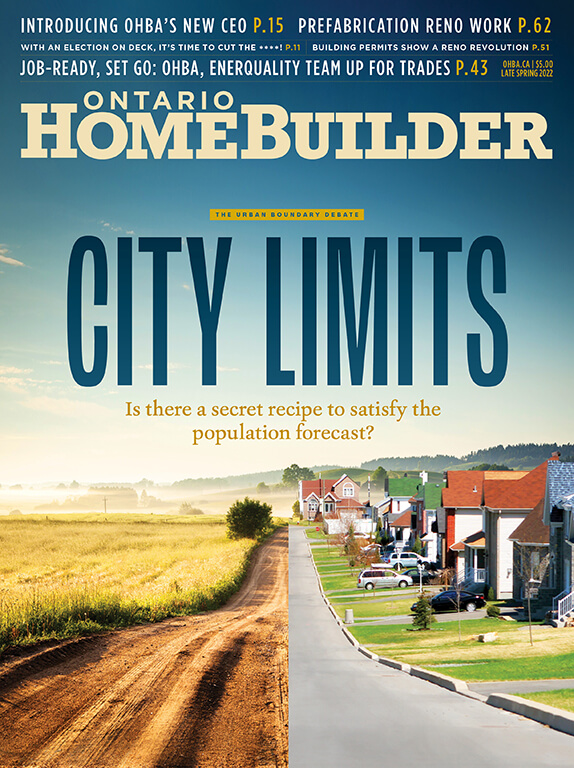 Provincial Government Passes New Housing Legislation On April 23, the provincial government passed the More Homes for Everyone Act, 2022. This legislation moves forward a number of critical changes long called for by OHBA and the residential construction industry to accelerate development approvals, reduce red tape and make it easier to deliver keys to eagerly […] ... Read more

Defining the future urban boundary recipe will require multiple ingredients If  you walked into a dinner party with the sole intention of setting the home ablaze in riotous debate, it’s hard to know which subject would prove most incendiary: religion, politics, Covid-19 or urban boundary expansion. If you live in Hamilton, it’s probably the latter. Last […] ... Read more
Recent Magazine Articles
Archive Categories