At some point, most builders will experience a case of “whatever can go wrong, will go wrong.” Even the most meticulously planned construction project can be derailed by unexpected events or mishaps. That’s why it’s important for renovators and builders to have Builder’s Risk insurance, whether the job is a modest home improvement or a brand new multi-million-dollar residential subdivision.

Builder’s Risk provides coverage for loss or damage due to things such as windstorms, lightning, theft, vandalism or fire, but not events such as strikes, civil wars or riots. Also known as “course of construction” insurance, it covers buildings during the construction process, providing coverage against loss or damage to materials and fixtures that will become a part of the structure, as well as the structure in progress. In most cases, the policy covers all contractors or subcontractors who supply labour or materials.

“A Builder’s Risk policy is designed to cover property in the course of construction that will form part of the completed construction project,” explains Bob Poklitar, Director of Risk Analysis with Federated Insurance. “Coverage for such property takes place while at the jobsite, while in transit and while in storage. While contractor’s equipment and tools are not covered under a Builder’s Risk policy, coverage may be extended to items such as expendable materials and supplies necessary to complete the construction project, temporary buildings, utilities, scaffolding, falsework, forms, hoardings and other similar work that are required to complete the construction project.”

“There’s a misconception that Builder’s Risk is the whole package, but it’s really a term that refers just to the property portion of a project,” adds Matt Croswell, Jones Deslaurier Insurance Management’s residential construction specialist.

Anyone associated with a project, but in most cases the homeowner or contractor, can purchase Builder’s Risk insurance, notes Kevan Thompson, vice-president of construction at Cowan Insurance. He says while homeowners can arrange the coverage through the broker they have their home insurance policy with, it may be more prudent for builders to do it, as they tend to have more knowledge about the insurance options and how much will be needed, and also deal with brokers that specialize in construction.

Builders and renovators should determine who is going to arrange Builder’s Risk coverage and also ensure that the homeowner or client has sufficient liability insurance. “Something that’s often missed, whether it’s a custom home builder or renovators gutting a place, is that homeowners expect the builder’s liability insurance will cover their liability,” says Croswell. However, he says homeowners must also have liability on their land in place since some mishaps will not fall under the builder’s coverage.

“Builder’s claims arise more out of the construction operation, such as if someone trips over a board or falls into a hole that’s been dug as part of the work,” explains Croswell. “If someone slips and falls on a sidewalk that hasn’t been shovelled, that’s the homeowner’s liability. If the builder does something that causes the house next door to burn down, that will fall under the builder’s policy, but if the homeowner is visiting the site and throws a cigarette onto his neighbour’s property and that causes a fire, that’s the homeowner’s responsibility.”

For Builder’s Risk policies, a project’s construction schedule and estimated budget are key in determining how much coverage is needed. “We’re pretty specific with our clients in what Builder’s Risk policies do cover, but you can never be 100% certain—there’s always inflation and we can account for that in coverage for our clients,” says Thompson. “As long as they’re getting the right advice from their broker, they should be properly covered.”

While some builders might be inclined to not initially insure a project for its full value, Glenda Johnston, V.P. of Commercial Lines with Hamilton’s Mainway Hunter Creighton Insurance Inc., attempts to steer clients clear of such thoughts. “There’s typically a 100% coinsurance clause on a Builder’s Risk policy, which requires the client to ensure to 100% of the completed value of the property,” Johnston notes. “That’s the physical hard costs of construction, not to be confused with the selling price, which includes the value of the land, location, etc.,” says Johnston. “If you underinsure it by 50%, you’re only going to get 50% of your loss.”

Thompson says it’s important to include add-ons to the Builder’s Risk policy to cover things such as earthquake and water damage (the deductibles tend to be higher than for incidents such as wind, fire and theft), especially as water damage claims are becoming commonplace. “Water has become a huge source of property loss claims, at around 60%,” echoes Peter Carr, V.P. of sales and marketing for Preferred Insurance Group. “It’s been a major issue for last few years with some micro-storms becoming catastrophic and causing water damage and sewer backup.”

Builders should also have an add-on that covers materials and fixtures purchased specifically for a project while they are being stored off-site or in transit, such as costly HVAC units. And don’t be afraid to increase the coverage if the project’s value increases, Croswell adds. “Say you are building a $3 million home in Rosedale and you need an extension to complete it and the marble for the countertops has been upgraded and the project is now worth $4 million. If the budget increases, it’s important to contact your broker on the Builder’s Risk policy.”

Construction of subdivision houses is different from renovations or custom building for a client, and it’s the builder’s responsibility to arrange for the proper coverage until a home deal closes and changes hands. Builders can also find brokers that offer Builder’s Risk insurance programs to cover all of their sites on an annual basis.

“If you’re a subdivision builder, there’s no crystal ball to tell you how much interest there is going to be in a particular site and how quickly the homes will sell and get built,” explains Croswell. “We set up the parameters of a policy to be well beyond what the builder would need and you want the limit to reflect his maximum exposure.”

Soft cost insurance is another important consideration for builders, as it covers some of the extra expenses that occur from a covered loss. While hard costs include such elements as labour and materials—the physical, tangible elements of a job—soft costs are intangibles you don’t see, such as legal fees, architect’s charges, promotional expenses, accounting bills and project management fees.

“If you have a fire four days before a block of townhouses is set to close and be turned over to the new owners, you have to rebuild the whole project,” explains Croswell. “It is going to take six months and you need to pay the project manager for that time.

And you may need to advertise again, so you’ll have added promotional expenses.” And because you’ll own the property longer than anticipated, you’ll have to pay property taxes on it, Thompson notes. “It’s often added to Builder’s Risk with large projects and it’s a must-have for them,” says Thompson. “Generally, we don’t see it on single home projects.”

Wrap-up liability is a separate policy from Builder’s Risk, but can often be arranged by the same broker. It’s specific to a project but is usually only put in place for very large jobs since the coverage can be expensive, says Thompson. Wrap-up liability covers everyone that steps foot on a site, including the owner, consultants, contractors and subcontractors. “Typically, you wouldn’t see wrap-up on a project of less than $5 million, but I’ve seen some on $1 million projects and I’ve seen $1 billion projects that didn’t have it. A lot of wrap-up coverage is bank-driven, and banks won’t provide financing for a project unless it’s in place.”

“Frankly, it’s a good idea to consider wrap-up, no matter what size the project is,” Croswell confirms. “In the event of a claim, you won’t have subcontractors, builders and homeowners’ insurance companies all pointing fingers at one another. It makes the claims process that much smoother.”

Further, the contractors’ and subcontractors’ individual liability policies may not adequately cover large claims. While they will have their own liability insurance—say, from $1 million to $5 million each—they may not actually be covered for that figure. If a contractor, for example, has $5 million in coverage in place and there’s a previous $4 million claim against him, that can limit his current coverage to $1 million.

Croswell advises that while the majority of the subcontractors will have their own liability insurance, some workers may not, and wrap-up liability provides peace of mind. “For example, a painter who doesn’t have liability coverage might knock over a heating device and burn the place down. Wrap-up will cover that. It’s a better policy, although it is more expensive.”

While builders may have a ballpark estimate of how much Builder’s Risk, soft cost or wrap-up coverage they’ll need, it’s best to heed an expert’s advice. The best plan is to deal with companies that have an established track record and specialize in construction-related insurance, suggests Carr. “If you think you can figure out how much coverage you need on your own, that’s mistake number one. First of all, seek professional advice, as every project is different and will have different details. It’s not a cookie cutter product. You’ve got to have an evaluation to figure out what coverage you need, and sometimes soft cost items get left out. Underinsurance can be a big disaster.” 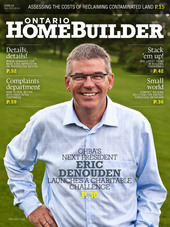 Stacking Up Against the Competition